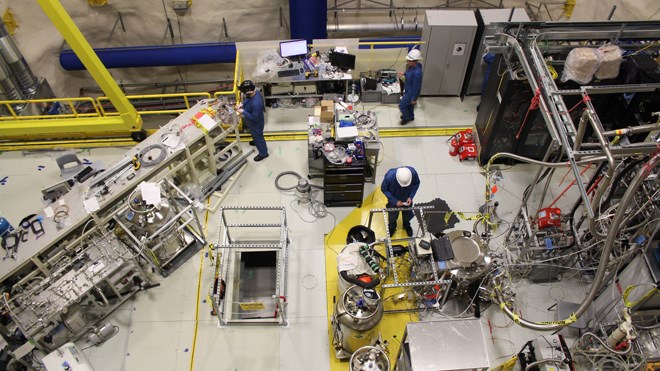 SNOLAB director Nigel Smith says every dollar the government invests into the underground laboratory leads to three dollars of economic value in the local economy. Photo by Jonathan Migneault.

Sudbury's SNOLAB is expected to create around 20 new jobs over the next year thanks to $28.6-million in federal government funding to help support its operations over the next three years.

With the new positions SNOLAB will have 96 staff members who primarily support around eight world-class experiments in an underground laboratory located at the 6,800-foot level of Vale's Creighton Mine.

SNOLAB director Nigel Smith said the facility will require around $14 million per year to maintain and expand its operations during its three-year funding cycle.

SNOLAB has depended on federal and provincial funding sources to maintain its operations. The various experiments, which involve 78 institutes from 15 countries, rely on research funding grants from around the world.

In addition to the $28.6 million from the Canada Foundation for Innovation’s Major Science Initiative, Smith said SNOLAB has requested $14 million from the provincial government to maintain and expand its operations.

“For every dollar the government invests, there's about three dollars of economic value in this local area,” he said.

In 2015, Art McDonald helped raise SNOLAB's international profile when he won the Nobel Prize in Physics for his work on the SNO experiment, which discovered particles called neutrinos have mass.

But results from the SNO experiment were recorded in the early 2000s, and the lab has had to show the work it has done since then to build on that world-class research.

The SNO+ experiment, expected to become operational in the next year, will build on the original SNO experiment findings.

Other experiments, like DEAP-3600 (which went online late last year), are part of the global search for dark matter, which scientists believe makes up more than 25 per cent of the known universe.

SNOLAB will need more staff to run and maintain experiments like SNO+ and DEAP-3600.

In addition to expanding human knowledge, Smith said such experiments also lead to technological breakthroughs. Many of the detectors and instruments used for fundamental science experiments find uses in other fields, such as medical imaging.