As a Petty Officer First Class with 134 Admiral Mountbatten, Celine Landry is not a stranger to competing against other corps from throughout Northeastern Ontario.
Mar 31, 2014 8:33 PM By: Arron Pickard 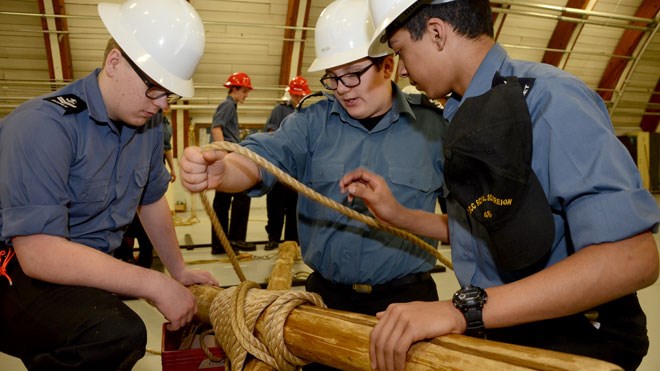 Master seamen Wesley Marsh, 101 Tiger from Timmins, Brandon Lay-Towns, 46 Royal Sovereign from the Soo, and Darius Wilson, also 46 Royal Sovereign from the Soo, work together to figure out how to lash together a sheerlegs — a hoisting apparatus used for masting ships, installing engines and hauling heaving objects — during the first inter-divisional seamanship competition in Sudbury. Photo by Arron Pickard.
As a Petty Officer First Class with 134 Admiral Mountbatten, Celine Landry is not a stranger to competing against other corps from throughout Northeastern Ontario.

In her six-year career as a cadet, she has pitted her knowledge and skills against other cadets in such events as sheerlegs, naval trivia and knot-tying, to name a few. In the past, these events have seen cadet corps compete against each other, but all that changed this past weekend at the Sudbury Armoury.

Some 200 sea cadets from across northeastern Ontario participated in the first inter-divisional seamanship competition, where cadets from different corps were put on the same team to work together as a single unit.

The idea of these competitions isn't new, but it has been revamped, said Lt. (N) Sean Pretty, commanding officer of the 134 Admiral Mountbatten Sea Cadet corps.

“The focus is on collaboration and problem-solving,” Pretty said. “We had junior cadets working side by side with senior cadets, which gives those senior cadets an opportunity to present leadership skills and guide the junior cadets through different evolutions and competitions.

“The feedback from staff and cadets has been nothing but positive. As a new experience, we're learning as we go, and hopefully it's something that will continue for years to come.”

As for Landry, she said it can be challenging working on a team with cadets she's never met before, but it was a great opportunity to make new friends and learn new skills.

“Every corps has its own strength, and by putting cadets from different corps onto the same team, different cadets bring their own skills to the table, and we learn from each other,” she said.