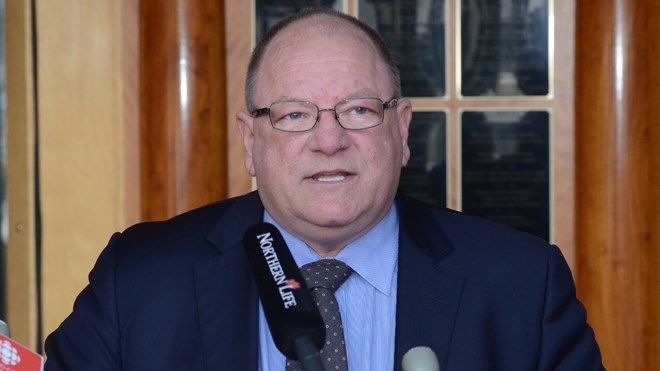 Greater Sudbury is being sued by a former member of Mayor Brian Bigger's office, who says she was fired for complaining about being harassed by Bigger's chief of staff, Melissa Zanette. File photo.

Greater Sudbury is being sued by a former member of Mayor Brian Bigger's office, who says she was fired for complaining about being harassed by Bigger's chief of staff, Melissa Zanette.

The city has also filed a statement of defence denying any wrongdoing and refuting all allegations. None of the claims have been proven in court.

The suit is by Alicia Lachance, a former public relations assistant, first with Mayor Marianne Matichuk for four months, then with Bigger after his election victory in October 2014. Lachance is seeking $150,000 for being wrongfully dismissed, another $150,000 in aggravated and punitive damages, her legal costs and any other award “the court deems just.”

Alternatively, she's asking the court to award about $159,000, the amount she says she is owed for the remainder of her contract in salary and benefits.

In an email, Bigger said the city could not comment on a matter before the courts.

"The city will be attending on Monday to defend its interests,” he said in the email. “However, as you can appreciate, we cannot speak to individual employee matters."

In her statement of claim, Lachance says that she was a “well-respected” member of Matichuk's office, where “she enjoyed significant status and professional prestige,” the lawsuit states. But problems began soon after Zanette was appointed the mayor's chief of staff and became her immediate supervisor.

“The mayor's office and its staff were treated with daily criticism, while the chief of staff's behaviour became radical, erratic and unprofessional,” the statement of claim reads.

“She began bullying, intimidating and she began to stalk the plaintiff on her Facebook page. The chief of staff's behaviour became verbally abusive and was often not justified to the situation that presented itself.”

Zanette behaved as if she expected “that the taxpayers of the City of Greater Sudbury pay the mayor's administrative assistant to act as a personal valet to the chief of staff,” the claim says, “to the point of expecting her to bring the chief of staff a pair of shoes to her when she attended a site meeting with the mayor and had brought the wrong shoes for the event.”

The claim says Lachance was subjected to “denigrating” treatment that included being yelled at and being the subject of sarcastic remarks. The situation grew worse when “most of the mayor's staff was terminated or left of their own volition because of the untenable atmosphere in the mayor's office.”

Lachance was expected to work 48 hours every week, the claim states, be on call 24 hours a day, seven days a week, to check her work cellphone every 10 minutes and to respond to phone calls within two hours.

While she continued to work – Lachance is the main breadwinner for herself, her two children and her common-law partner – the situation worsened, the claim says, “when the chief of staff began verbally abusing her and making derogatory comments about her personal appearance.”

When another staffer was told to accompany the mayor to a meeting because Zanette felt Lachance was not dressed appropriately, she contacted the city's human resources department and filed a formal complaint.

The city hired an independent investigator from DiBrina Sure Human Resources Inc. to look into the matter, but he concluded that, while Lachance was sincere in filing the complaint, he felt the conflict was more the result of working in a stressful atmosphere.

“He felt this was due to the nature of the job, rather than due to the influence of the chief of staff,” the claim says. “He also concluded that while yelling or raised voices … may not be viewed as an acceptable means of communication in the workplace, he didn't find that there was sufficient evidence to conclude that the actions of Ms. Zanette constituted workplace harassment.”

However, the investigator also told her that “where he found any conduct to be inappropriate for the workplace in the circumstances, these items would be highlighted to the city in a 'fulsome confidential report.'”

Her statement of claim says she has not been able to get a copy of that report, nor did the investigator appear to interview any of a list of witnesses to Zanette's behaviour that Lachance provided.

After the investigation was complete, and while she was off on unpaid sick leave, Lachance asked to meet with the mayor to discuss the situation.

“However, she was called into the office on Nov. 2, 2015 and was terminated from her position by the mayor,” the claim says. “The mayor advised the plaintiff that she was being terminated because the city didn't have a position for her, although her position of administrative assistant had not been filled.”

In its statement of defence, the city says Lachance's work was not satisfactory, that she made grammatical, spelling and other errors, missed deadlines, “inefficiently managed her time” and “seemed distracted and unfocused while at work.

“The plaintiff was provided with support and constructive feedback on how to improve her performance,” the defence claim says. “The plaintiff was not receptive to any form of feedback or criticism regarding her work performance. She grew hostile towards her supervisor and towards any assignment she considered to be unimportant.”

The independent investigator also concluded that Zanette “had not engaged in a course of conduct that was vexatious and had not created a hostile work environment.”

As for the allegations about stalking her on Facebook, the defence claim says that a member of the public had complained Lachance was posting “allegations against the City of Greater Sudbury Police and other local businesses and individuals regarding animal welfare.”

Those comments reflected poorly on the mayor's office, the claim says, and raised questions about Lachance's “judgment, her trustworthiness ad her willingness to disclose confidential information obtained in the course of her employment.”

The defence claim also says she gave out the key to Zanette's office, raising more questions about her suitability.

When she returned to work after the investigation, the defence claim says Lachance resisted Zanette's attempts to improve her work performance.

“When the plaintiff was coached on her performance by her supervisor, she left the office, refused to return to work and insisted on personally meeting with the mayor.”

The city's version of events in that meeting differ greatly with Lachance's. Rather than being told she was fired, the claim says she told Bigger she would not work with Zanette and asked to be transferred.

“The plaintiff was told that while her position of administrative assistant was available, there were no alternative positions available to her with the city,” the claim says.

“In response, the plaintiff stated that she would rather be terminated than continue working with her supervisor.”

The city admits she was fired on Nov. 12, 2015, but says under the terms of her four-year employment contract, she “could be terminated at any time without cause by providing notice or pay in lieu of notice in accordance with the Employment Standards Act.

If the court were to rule in her favour, however, the defence says Lachance's damage award claims are “excessive, remote or not recoverable at law” and that she “has failed to take all reasonable steps to mitigate her damages.”