A last goodbye for Capt. Filliter

Hundreds of people joined the Filliter family in grieving the loss of Capt. Don Filliter — a son, brother, husband, father, uncle and friend who passed away May 31 when an Ornge helicopter crashed near Moosonee.
Jun 8, 2013 6:59 PM By: Sudbury.com Staff 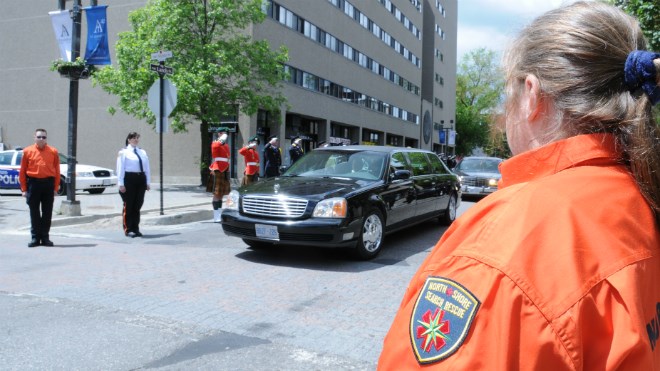 Hundreds of people, many in uniform, gathered to say one last goodbye to Don Filliter. The local pilot passed away in a helicopter crash May 31. Photo by Marg Seregelyi.

Hundreds of people joined the Filliter family in grieving the loss of Capt. Don Filliter — a son, brother, husband, father, uncle and friend who passed away May 31 when an Ornge helicopter crashed near Moosonee.

Filliter was one of two pilots, along with two paramedics, on board the chopper when it hit the ground just after midnight. All four people died. The Sikorsky S76 helicopter departed from the Ornge Moosonee base. The two pilots and two paramedics were en route to Attawapiskat to transport a patient.

Contact was lost with the aircraft shortly after takeoff. Immediately, efforts began in relation to overdue and missing aircraft procedures. There was no patient on board the aircraft at the time.

Kevin Mulcair, a senior pilot who reported to Filliter, said there will be a “huge hole” where Filliter used to be.

“We're not going to try to replace him,” Mulcair said. “We going to earn what he gave us (and) continue his tradition.”

As a boss, Mulcair said Filliter always took the time to care. He was respectful toward everyone he worked with.

“He always had time,” Mulcair said. “He gave you his full attention.”

He was also endlessly proud of his family. Every year, Filliter would politely hand out any calendars sent to him from companies because the one his wife made him with photos of his family was the one he wanted above his computer.

Filliter and his wife Suzanne Pelletier would have celebrated their 25th wedding anniversary this summer. They had accomplished much together, including bringing up their children Michelle, Mark and William.

Michelle spoke fondly about her father.

“I'm grateful for what I have to look back on” the 23 year old said. His eldest son Mark spoke in the same warm tone.

His older brother, Ken, shared many heartwarming stories from growing up with “Donny.”

Some things, like his ability to make the best out of every situation, have never changed.

The stories shared about Filliter brought smiles and tears to the hundreds of people gathered at the Church of the Epiphany during the June 8 funeral. Many arrived in uniform — police, paramedic, ministry of natural resources. They all came to show respect for the fellow front line worker.

As the service came to an end, they said their final goodbye by lining up on either side of Larch Street, creating a path for the family's vehicles to drive through. No one left, however, until a helicopter flew through the sky above the church, waving one last emotional goodbye.