A man on a mission across Canada

Kevin McCormick is dedicating his time and money to ensure that the sacrifices made by the men and women of the Canadian Armed Forces doesn't go unseen.
May 4, 2013 3:30 PM By: Sudbury.com Staff 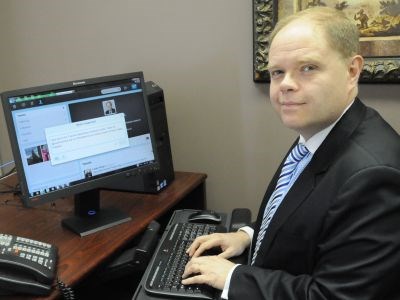 Huntington University president Kevin McCormick is on an 18-month mission to mark the 100th anniversary of the start of the First World War. He is personally funding the entire project with the hope that it will encourage others to find their own way to support their local, provincial or national military museums. File photo.
Kevin McCormick is dedicating his time and money to ensure that the sacrifices made by the men and women of the Canadian Armed Forces doesn't go unseen.

McCormick, honorary lieutenant-colonel of the Irish Regiment of Canada and presdident of Huntington University, is doing his part in making sure that Canadian history is preserved and honoured by this and future generations of Canadians.

McCormick is on an 18-month mission to mark the 100th anniversary of the start of the First World War. He is personally funding the entire project with the hope that it will encourage others to find their own way to support their local, provincial or national military museums.

“Whether it's showing support through donations of items or other resources to continue the museum’s ability to preserve and honour our fallen heroes,” said McCormick. “As well as the

amazing contributions of the women and men of Canadian Military.”

This mission started April 16 in Vancouver, B.C., with the first stop at the Seaforth Highlanders, a light infantry regiment of the Canadian Forces.

The donation included a presentation of rare medals, financial donation to their military museum, and the personal property of Seaforth Highlander’s past member, Sgt. J.I. Thompson.

Other historic objects will make their way to other museums, military associations and units across Canada, as well as reuniting medals and personal belonging's with family members.

For example, from B.C., McCormick travels to Regina to present the Saskatchewan Military Museum with more than 30 items belonging to a soldier who lost his life in the First World War.
The items include his medals, diaries and other items from his life in the Canadian Military.

McCormick will also be making hundreds of donations of various items, such as the memorial cross, victory medal and meritorious service decorations including hundreds of personal belonging's from fallen soldiers.

Some of the objects that are being donated were purchased through his own resources and money, which could be valued at $5,000, but the total project value is estimated at 20 times that amount.

“The financial value is not what is important ... but rather the personal cost and sacrifice embodied in each and every item ... that transcends time and is truly priceless,” said McCormick.

“I am both humbled and privileged to do a small part to thank and honour the sacrifices made by the members of the Canadian Forces, as well as the contributions made by their families and loved ones.”

On July, 28, 2014, the day of the First World War's 100th anniversary, McCormick intends to make his final donation at the ceremony in Ottawa at the tomb of the Unknown Soldier.

By this time, McCormick said he will have made donations across the country, covering every branch of the forces, such as the air, navy and army, as well as the entire spectrum of soldiers who gave their lives, including Aboriginal soldiers and medical staff.

In establishing these awards, McCormick said he hopes that they will further encourage the acknowledgment and importance of military history, as well as the participation of young Canadians to explore the outstanding contributions that have been made by members of the Canadian military for countless years.