A new industry that uses bacteria to remediate old mines? 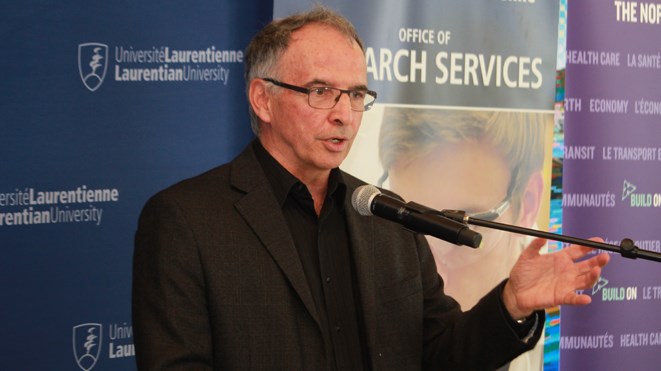 John Gunn, the Canada Research Chair for stressed aquatic systems and director of the Vale Living with Lakes Centre, says a new Industrial Research Chair position in bio-mining, bio-remediation and science communication at Laurentian University could lead to an entirely new industry in Sudbury. Photo by Jonathan Migneault.

A new Laurentian University Industrial Research Chair position in bio-mining, bio-remediation and science communication has the potential to kickstart a new industry in Sudbury that could create hundreds, or even thousands of jobs, says the director of the Vale Living with Lakes Centre.

“It's not an exaggeration to say there will be an entire industry built around this,” said Laurentian professor John Gunn, who is also the Canada Research Chair for stressed aquatic systems. “The demands are so big.”

Sudbury MPP Glenn Thibeault announced Monday the province is investing more than $630,000 through the Northern Ontario Heritage Fund Corporation to create the five-year research chair position at the university.

Gunn said they already have a candidate lined up for the position, and are expected to make that announcement, along with additional funding for research, in late May.

The new researcher would work with a team of graduate students to improve the use of bacteria for mine remediation.

“When you crush ore into small enough particles there's bacteria on all the surfaces,” said Gunn.

Some of those bacteria can liberate copper and nickel from the ore into a liquid form by breaking down the iron products in that ore, he said.

Once the bacteria do their job, it's much easier to recover the liquid nickel and copper through a process called electroplating.

Once it is perfected, the process could be used to recover metals from Ontario's 5,000 abandoned mine sites, and help remediate large tailings deposits, like those that exist in Copper Cliff.

Gunn said bacteria are already used in South America to recover metals, but the process still needs to be perfected, especially in colder climates where bacteria do not prosper.

The research chair would develop ways to help the right kinds of bacteria prosper in a mine environment. In some cases, for example, solar panels could feed electricity into waste materials to enhance bacterial action.

“We're going to build a practice pile at Copper Cliff over these next couple of years and start to test out these technologies,” Gunn said.

Thibeault said Sudbury is already on the scientific community's map thanks to neutrino research at SNOLAB, and new work in bio-mining and remediation could further improve that reputation.

“They're doing phenomenal work here at the Vale Living with Lakes Centre and at Laurentian University,” he said.