A safe space: Group a refuge for fibromyalgia sufferers

For years the Sudbury Fibromyalgia Support Group has offered a safe space for people with the medical condition to share their daily challenges and offer advice to make their lives a little easier.
Apr 9, 2015 2:32 PM By: Jonathan Migneault 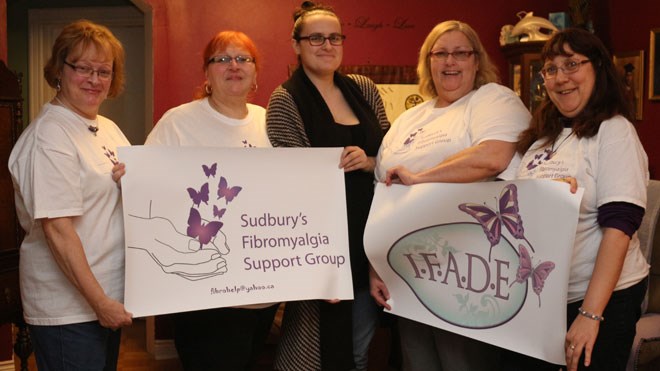 According to the Mayo Clinic, “fibromyalgia is a disorder characterized by widespread musculoskeletal pain accompanied by fatigue, sleep, memory and mood issues. Researchers believe that fibromyalgia amplifies painful sensations by affecting the way your brain processes pain signals.”

Symptoms sometimes start after a traumatic event. In other cases, symptoms gradually accumulate over time with no single triggering event.

Fibromyalgia is more common in women than in men.

Tammy Rumley was diagnosed with the condition in February 2013, and started attending the support group that same month.

Her diagnosis came after years of chronic pain and fatigue.

She had to quit her job as a personal support worker in 2010.

“By the time I got home (from a shift) it took me about 15 minutes to get out of my car, because my legs wouldn't work anymore,” she said.

Her doctor only determined she had fibromyalgia after ruling everything else out. At one point, she thought she had multiple sclerosis, because the symptoms are similar.

Since her initial symptoms, Rumley said her condition has gotten worse.

Whenever she leaves the house, she said she needs to decide if her errands are worth the pain that comes with her getting out of bed.

The bi-weekly support group meetings she attends are worth the pain, she said.

But with the support group, Rumley gets to interact with other people who understand her condition, and can share their own experiences with fibromyalgia.

“It's nice to be around people that understand,” she said. “We don't sit around complaining about what we have.”

Rumley found out about Sudbury's Fibromyalgia Support Group when she read a short blurb in Northern Life about the group's annual In Support of Fibromyalgia Awareness (IFADE) event.

The event coincides with Fibromyalgia Awareness Day. This year, it takes place May 9 at the Howard Johnson Hotel on Brady Street.

Janet Lewis, the support group's co-ordinator, said doctors are often skeptical when patients tell them they may have fibromyalgia.

“You're very lucky if you get a doctor who believes you,” she said. “There's not a lot known about it, still, and a lot of doctors think it's just an excuse for people to be lazy.”

Rheumatologists usually diagnose the condition, and Sudbury only has one.

Lewis said there are still a lot of people in the community who think they're alone, because their doctors may not recognize fibromyalgia, and they may not know anyone with the condition.

Jocelyn Black said Sudbury's Fibromyalgia Support Group helped pull her out of a depression after she had been diagnosed with the condition.

But when Black discovered the support group, she found a group of people who understood what she was going through and helped her deal with the major changes in her life.

“I've done a 360 from being a very active person, to now planning my days,” Black said. “I have to learn to take baby steps.”

To find out more about the Sudbury Fibromyalgia Support Group you can reach Janet Lewis at 705-525-5121, or search the group's name on Facebook.