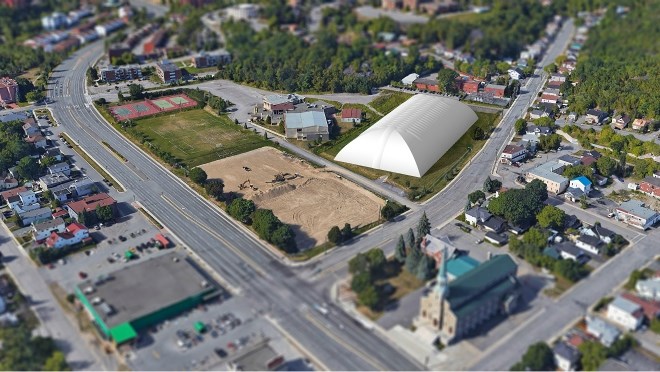 The 200x400 square feet bubble was designed by local architects Yallowega Belanger Salach and will run along the Kathleen Street side of Sacre Coeur. (Supplied)

With so many bubble bursts over the last several years, Mike Graham of the Sudbury District Sports Club says he's optimistic that – finally – a sports dome is coming to Sudbury.

“I can't see any reason why not,” Graham said Thursday, after a public meeting at Sacre Coeur school on Notre Dame Avenue, where the $3.3 million sports complex will be built.

“I mean, we're in the city's hands at the moment. We've asked (city) council to assist in ensuring that the their departments move quickly enough so we can get started.”

The crowd of about 100 at the meeting heard details of the proposal, which is being financed by a private donor. Graham said the financier has built several sports dome projects, but wants to remain in the background until the Sudbury facility is approved. The dome should make enough money to repay the $3 million he's providing, and, longer term, pay for maintenance and upgrades.

In turn, the French Catholic school board (Conseil scolaire catholique du Nouvel-Ontario) will spend $300,000 on parking lot and landscaping improvements.

The 200x400 square feet bubble was designed by local architects Yallowega Belanger Salach. Louis Belanger was on hand to describe the structure, which will run along the Kathleen Street side of Sacre Coeur.

In response to a question from Ward 12 Coun. Joscelyne Landry-Altmann about noise, Belanger said the structure isn't held up by a compressor, but by fans in an enclosed building. It's the same system used by the tennis dome at Queen's Athletic Field that produces little noise.

“It's not a compressor,” he said, adding that it will be 65 feet high at its peak and no blasting will be required.

Education director Lyse-Anne Papineau gave the crowd an overview of the history of the project, including the aborted attempt by the outgoing Liberal government to last spring to provide $4 million for a dome at Lasalle Secondary School spearheaded by the Fabio Belli Foundation.

That money was cancelled last month by the Progressive Conservative government that was elected in June.

It was the latest setback for a project that dates back several years, when Belli was councillor in Ward 8 determined to get the facility built.

It was close to reality in 2012 (https://www.sudbury.com/local-news/soccer-dome-delayed-until-2013-243397), when it was to be built at St. Charles College. But a dispute between city building officials and the developer over how much concrete and soil rehabilitation would be needed increased costs and scuttled the project.

It has been delayed since then, and the foundation set up by Belli's family after his death in spring 2014 has been working to get the project done. With the $4 million now cancelled, members of the foundation have said they are determined to carry on.

The Sacre Coeur sports facility will house two artificial turf fields and will be in operation 12 months a year. It will be owned by the school board, which will have rights to the facility during school hours. The SDSC will have access to it after school, and will charge $150 an hour for groups that want to rent it.

A building permit application has been submitted to Greater Sudbury, with an eye on beginning construction in spring 2019.

“By encouraging physical activity 12 months a year, the addition of a sports dome will be an important asset for our students, for residents of the Flour Mill and Donovan neighbourhoods and for the community as a whole, " Dr. André Bidal, president of the CSCNO, said in a news release."We are very happy to contribute to this highly anticipated project."

For his part, Graham said he hopes the city can move quickly to approve the project, which will take about three months to build.