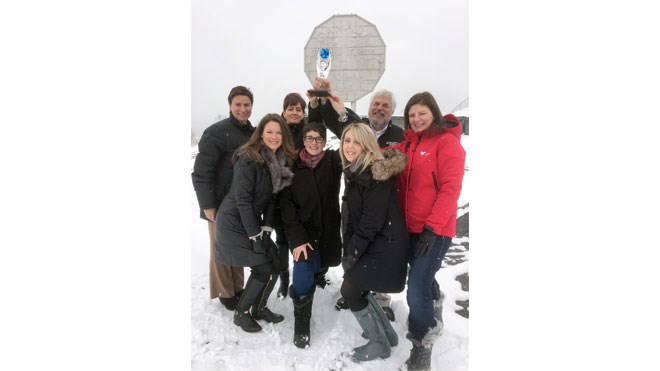 The folks seem pretty excited about the city winning a tourism award recently. Celebrating at the Big Nickel are (from left) Brenda Tremblay from Science North, Julie Ceming from Laurentian University, Suzanne Lortie-Carlyle with Health Sciences North, Meredith Armstrong, Shawna Cole and Ian Wood, all from the City of Greater Sudbury, and Danica Pagnutti from Vale. Supplied photo.

The City of Greater Sudbury received the 2016 Ontario Tourism Award of Excellence in the category of Tourism Marketing Partnerships for attracting and hosting CTV’s The Amazing Race Canada, Canada’s most watched television series during the summer of 2015.

Staff received the award at the Ontario Tourism Summit’s Industry Awards of Excellence Gala held in Ottawa on Nov. 22, 2016.

“On behalf of Council, I would like to commend our staff at the City Of Greater Sudbury who worked so hard to get our community this tremendous profile across Canada. I would also like to extend congratulations to Greater Sudbury Tourism and to our community partners who so graciously opened their doors to The Amazing Race Canada,” said Greater Sudbury Mayor Brian Bigger in a press release. “This award for the City of Greater Sudbury, is shared by many local organizations and individuals whose efforts have further enhanced our community’s ranking as a premier tourist destination.”

Tourism staff on the city's economic development team at assembled a partnership of community organizations to welcome The Amazing Race Canada film crew and contestants over several weeks during the summer of 2015. A series of adventures with a distinctive local flavor aired to a national audience on Aug. 22, 2015 and the broadcast was celebrated with an outdoor viewing party on the grounds of Science North, with more than 1,100 Greater Sudbury residents in attendance.

“We’re delighted to be recognized for our work on The Amazing Race Canada,” said Meredith Armstrong, manager of tourism and culture for the City of Greater Sudbury, in a press release. “We couldn’t have done it alone, and we want to thank and congratulate our partners, the Ontario Tourism Marketing Partnership Corporation (OTMPC), Tourism Northern Ontario, Vale, Laurentian University, Science North and Health Sciences North, who were all integral to the success of hosting The Amazing Race Canada.”

The Ontario Tourism Industry Awards of Excellence are presented to organizations, businesses and individuals who represent the quality offerings that make Ontario a world-class destination. The Tourism Marketing Partnership Award celebrates those who contribute to Ontario’s tourism industry through impactful partnerships, marketing activities and media relations.