After years of neglect, upgrading city's emergency response is going to be controversial and expensive
0
Feb 28, 2017 5:00 PM By: Darren MacDonald 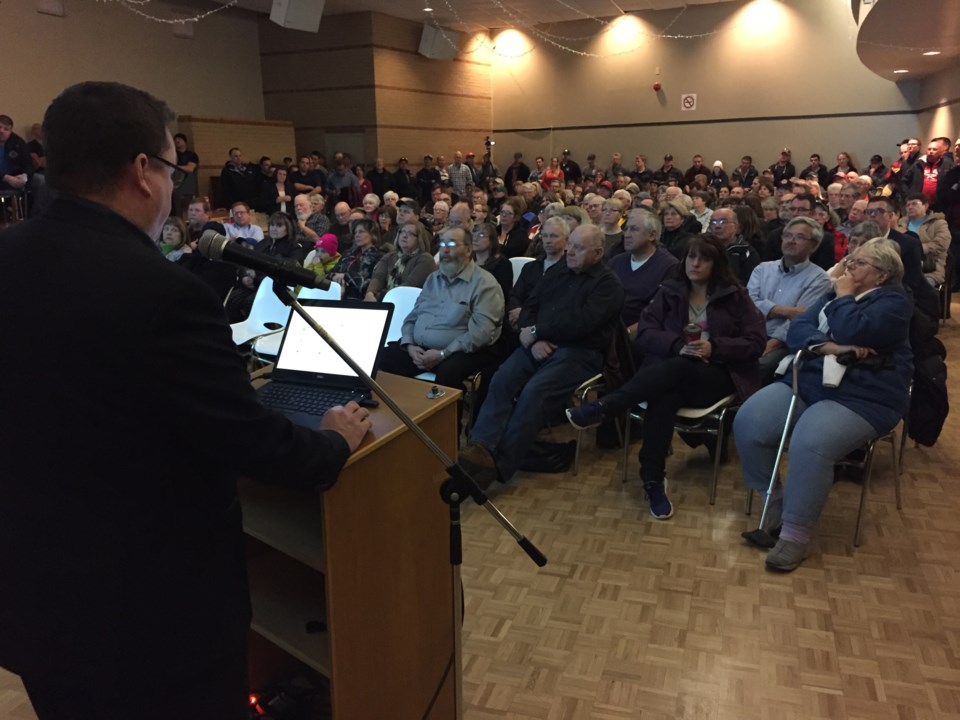 Reporter Darren MacDonald has some helpful hints for city staff when presenting its proposal to update the city fire service. Photo by Heather Green-Oliver

They were turning people away at the door Monday night in Lively, as crowds gathered to hear the details of a controversial fire optimization plan.

And there was plenty of hostility directed toward city staff about the proposal, which would close some stations, reduce the number of volunteer firefighters and increase the city's complement of career firefighters.

In this day and age, something that calls for replacing many of the city's volunteers by adding 58 full-time firefighters is a tough sell. Volunteers receive about $3,200 a year, compared to as much as $125,000 for a full-timer. The math seems ridiculously easy. How can that make sense?

“I don't want my taxes to go up any more,” said Lively resident Linda Henry, who was turned away at the door because the crowd in the library was already at capacity. “They already went up $300 last year. I pay more than $3,000!”

And there was more than one call of “bullshit” from the Lively audience.

But, as Fire Chief Trevor Bain told the crowd, fire services have been neglected and largely unchanged since amalgamation. Some stations are old and need replacing, some need to be closed or relocated. Whatever the city decides to do, it's going to be expensive — $49 million over the next decade to maintain the status quo, or $64 million for the full optimization plan.

It's a complex proposal, one that's not easy to explain in a few graphs. But still, there has to be a better way to deliver the details.

Bain and other city staff spent almost two hours Monday explaining the plan. I attend planning meetings, but even for me, two hours of listening to dry details is too much. For a largely skeptical public, having them sit through such a long presentation only stoked anger.

People wanted to vent, get their questions answered. As it was, the majority of time was spent trying to explain the minutiae of the proposal.

All important to be sure, but really the crowd was there because of the volunteer versus career firefighters issue.

Volunteers feel disrespected, and many people see the proposal as an attempt to swell the ranks of full-time firefighers rather than a way to improve response times across the city.

“Volunteers will always be part of our response,” Bain told the crowd at one point.

But the crowd was already dubious. Even Ward 3 Coun. Gerry Montpellier was unconvinced.

“I will not be supporting this program at all,” he said, to the biggest cheer of the night.

There are still four more public meetings on the plan over the next week and a half. While staff have said the details will be available to the public by the middle of next month, why not put the whole plan online now? Let everyone review it and come with questions based on what they have seen. And reduce the presentation part of the meeting to 30 minutes – 45 minutes if you must. Then answer questions for an hour and a half.

That's not a magic bullet, but staff would have a better chance addressing concerns if more time was spent answering them. And if you want to swell the size of municipal employees by 58, you'd best have comprehensible answers for the public explaining why you're not just empire building.

The schedule for the rest of the public meetings:

Sudbury.com filmed the entire presentation made in Lively on Feb. 27. Check out the video below. Click here to skip ahead to the question period.