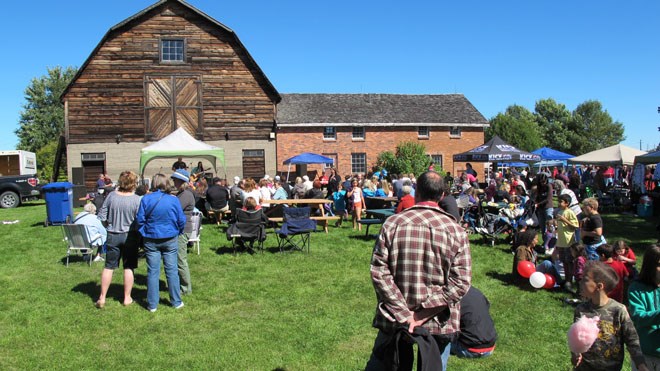 The Anderson Farm Museum Heritage Society is trying to build a $70,000 timber-framed pavilion at the Lively facility, but still needs to raise $42,805 towards the cost, even after being approved for city funds.

“We are used to going to the community to ask for sponsors, because they sponsor all of our events anyway, and they're quite used to us,” said the society's president, Forbes Stoodley.

The society received $17,195 last fall from the 2018 Healthy Community Initiatives (HCI) fund for Ward 2. They're also applying for this year's HCI funds.
The Anderson Farm Museum Heritage Society itself kicked in $2,000, the Walden Lions Club pledged $5,000, the Whitefish Lions Club $1,000 and the Walden Seniors and Pensioners Woodworkers $2,000.

Reg White, a member of the heritage society and the community's woodworkers group, came up with the idea to build a pavilion at Anderson Farm a number of years ago.

The group was quoted $150,000 to build the structure by a Southern Ontario contractor, so they decided to purchase materials locally and hire a local contractor, bringing the cost down to $70,000.

“It's going to be a post and beam construction with a gabled roof,” Stoodley said.

“It's going to be open on all sides, of course, but with the ability at some point down the road to close off if we wish. It is going to be 32 feet by 40 feet."

“It's going to have a lot of uses. We're going to use it of course to shield the people who come to our free Wednesday night concerts during the summertime. They'll be sitting under it."

“Sometimes it rains, and we have always had to put up this huge tent, and we always had to hire somebody to do it, and the thing is getting old and ratty now. This will be really handy …"

“It's going to be used by the community, by schools, by the museum itself.”

He said Anderson Farm is one of the “jewels” in Lively, widely used during many events, including weekly live music concerts during the summer, the annual fall fair and a Christmas tree lighting event.

“I think it's an exciting project,” Vagnini said. “This is something that is permanent and it will continue to be one of our icons within Ward 2.”

To learn more about the project, phone Stoodley at 705-692-9224 or visit the Anderson Farm Museum Heritage Society's Facebook page.

Popescu 'obsessed with anti-gay rhetoric,' Crown says
Jan 17, 2020 6:12 PM
Comments
We welcome your feedback and encourage you to share your thoughts on this story. We ask that you be respectful of others and their points of view, refrain from personal attacks and stay on topic. To learn about our commenting policies and how we moderate, please read our Community Guidelines.