The Arctic's climate is rapidly warming, and should act as a warning signal of what's going to happen further south with climate change, according to a Queen's University professor who has done research in the region for many years.
Dec 11, 2013 9:20 PM By: Heidi Ulrichsen 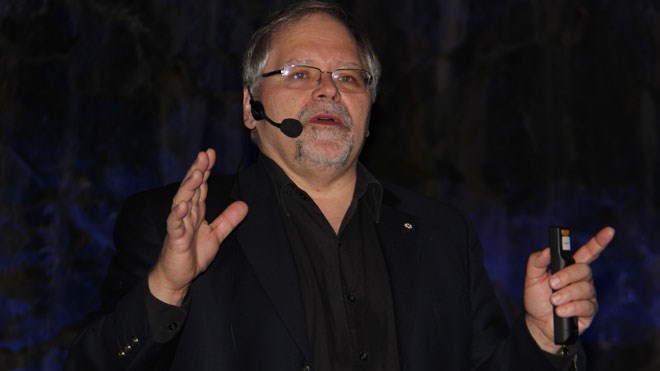 The Arctic's climate is rapidly warming, and should act as a warning signal of what's going to happen further south with climate change, according to a Queen's University professor who has done research in the region for many years.

John Smol is an expert on paleolimnology, or the science of examining the sediment in bodies of water to determine environmental conditions over the ages.

He explains climate change is disproportionately large in the far north.

That's because the Arctic, in its natural state, is covered in light-coloured ice and snow, which reflects heat, he said.

But with increasing temperatures, some of that ice and snow has melted, and there's more dark areas which absorb heat, and in turn causes even more ice and snow to melt.

“The Arctic is what we refer to as the miner's canary of the planet,” Smol said, speaking at a Dec. 10 lecture at Science North organized by the Vale Living with Lakes Centre.

“It's the first to show signs of environmental change to the greatest degree when it comes to the climate.”

Some of the Smol's Arctic research has shown this phenomenon in action.

Back in September 1999, there was a storm on the Arctic Ocean which involved high winds, followed by a storm surge on the Mackenzie Delta which caused floods that reached as far as 20 to 30 kilometres inland.

Using core samples of the sediments in these lakes, Smol was able to prove that this storm surge event was “unprecedented” in the lakes' 1,000-year history. Oral history from Inuit who live in the area backed up his finding.

Smol showed that algae diatoms that exclusively inhabit salty water only appeared in the lakes after 1999.

The storm surge was probably caused by higher sea levels boosted by melting ice and snow. The fact that there's decreased ice on the sea also likely contributed, as ice pack prevents storm surges from getting far, Smol said.

While this storm surge didn't kill anyone, it could be a harbinger of what's to come for low-lying areas on the planet which do have a high population density, he said.

Smol also spoke about a series of ponds in Cape Hershel on Baffin Island he's been studying since the 1980s.

The temperature has gotten so much warmer that some of these ponds which existed year-round in the 1980s now dry up completely in July, he said. The ones that don't dry up are now shallower and more salty.

Smol said even though scientists such as himself have proved climate change is affecting the Arctic, people still think these changes are happening much more slowly than they actually are.

“The point is it's happening,” he said. “These are serious consequences. It's going to be affecting all of us around the world. It's time we took action and took action quickly.”

But the damage has already been done, and the world needs to ready itself for the impact of climate change, he said. “We're not doing that either,” Smol said. “We're really very poorly prepared for a very serious problem.”