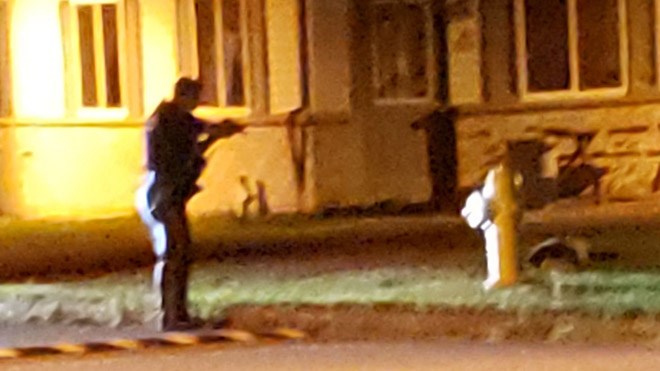 The pursuit began around 9:10 p.m.* last Friday morning when police responded to a call for service regarding a robbery at a cottage on the Ketchancookem Trail in Mindemoya.

The Azilda man, who was on a court-imposed recognizance, had been staying at a nearby resort where he departed that morning without his surety, the person tasked by the court with insuring the man complied with the stipulations of his recognizance.

Police believe the man committed the robbery, then managed to gain entry into a cottage on Ketchancookem Trail not long after, where at knife-point he demanded the keys to the occupant's vehicle.

He then left the scene in the stolen vehicle, police said, and began travelling down Hwy 540 at a "high rate of speed and (in a) careless manner," as described in a press release.

Police say he used that stolen vehicle to force a police vehicle off the road near Little Current, in his attempt to flee the Island, "showing no concern for public safety."

The man managed to get himself from Manitoulin Island to Hwy 17. The OPP said officers continued to try to stop the vehicle the man was driving, but the man swerved around spike belts and drove the vehicle at police officers, nearly hitting them.

Despite the efforts of police to stop him, the man continued east on Hwy 17 and made it back to his home in Azilda police said.

Although police provided no timeline, a Sudbury.com reader said the man arrived at the Antigonish Co-op around 10:30 p.m. that evening.

Kierstyn McEwen said the man sped into the parking lot at "at least 80 km/hour." And began going back and forth from his own unit to the vehicle, possibly packing the vehicle to continue his flight from police.

"Then (he) started going door to door at other units. He was told to leave by a habitant of the co-op," McEwen wrote. "He replied, 'you're right, I better go'."

McEwen said it wasn't long before police arrived and arrested the man at gun point. Soon after four to five other police vehicles arrived, as well as an OPP K-9 unit.

It also sounds as though the man may have a reputation among residents of the co-op because McEwen added, "The neighbourhood is not impressed with the level of negligence by the court to allow this man to return to crime again and again."

OPP and Greater Sudbury Police were involved in the arrest in Azilda.

As a result of the incident, Blake Guy-MacKinnon, 23, has been charged with robbery with a weapon, dangerous operation of a motor vehicle, possession of a weapon for a dangerous purpose, failure to comply with a recognizance and driving while under suspension.

Mackinnon was scheduled to appear before the Ontario Court of Justice Bail Court in Gore Bay on Aug. 3.

*An earlier version of this story included incorrect information provided by the OPP regarding the time of the occurrence. It has been corrected from a.m. to p.m.