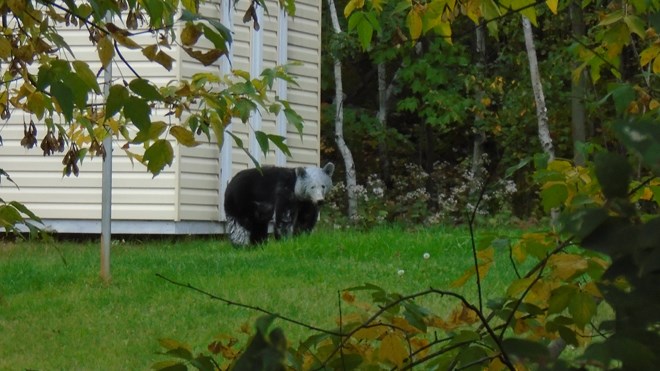 In late October, Val Caron resident Ron Lafontaine snapped this photo of an American black bear that appears to have a white head and back leg. But MNRF official Karen Passmore said it's likely the bear just got into a substance that dyed it's fur white. Photo by Ron Lafontaine.

Earlier this fall, Val Caron resident Ron Lafontaine snapped this photo of an American black bear that appears to have a white head and back leg.

He said he took the photo somewhere in the Sudbury district, but doesn't want to disclose exactly where because he's concerned someone might track down the bear and shoot it.

Lafontaine said he's been hunting since he was 17 years old, and has spent plenty of time in the bush, but has never seen anything like it.

“I was very excited,” he said, adding that seeing the bear made his day. “I showed everybody in the family. They're in disbelief until you show him the pictures. The picture shows 1,000 words.”

Sudbury.com sent the photo to the Ministry of Natural Resources and Forestry to see what they thought.

There is a rare subspecies of the American black bear living in British Columbia that has a white or cream-coloured coat like a polar bear. It's known as the Kermode bear or the spirit bear.

The colour is due to a double recessive gene unique in the subspecies. But the MNRF said it's unlikely this bear's colouring has anything to do with genetics.

“This is the first time we’ve seen this photo,” said Karen Passmore, regional outreach specialist with the ministry, in an email.

“While MNRF can’t confirm without capturing and seeing the bear, we suspect this is not a genetic phenomenon; rather, the bear may have gotten into a container coated with something white (we can see from the photo the substance is also on part of its hind end).

“It’s likely that this white bear will be black again in the spring.”

Hwy. 144 closed at Cartier due to a collision
Jun 1, 2020 7:55 PM
Comments
We welcome your feedback and encourage you to share your thoughts. We ask that you be respectful of others and their points of view, refrain from personal attacks and stay on topic. To learn about our commenting policies and how we moderate, please read our Community Guidelines.