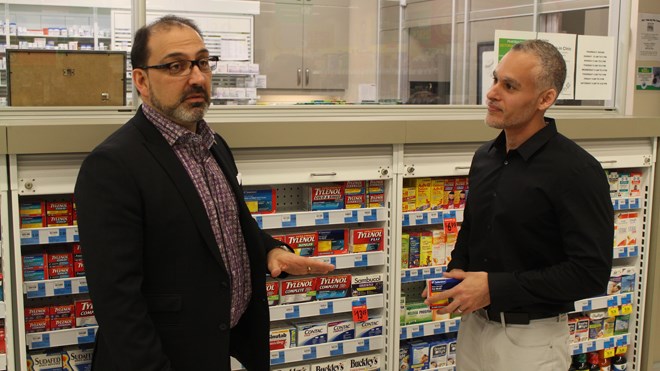 Sudbury MPP Glenn Thibeault chats with Metro pharmacy manager Sami Dabliz at the Food Basics on Regent Street pharmacy on May 20. Dabliz talked about the improvements to the province's access to healthcare through the Healthcare Closer to Home program. Photo: Matt Durnan

Streamlining access to quality healthcare was the topic of discussion in the pharmacy at Food Basics on Regent Street on May 20.

In 2012, the Ontario government passed regulations expanding the range of patient services pharmacists can provide.

Healthcare Closer to Home aims to highlight the benefits of a number of expanded patient services being offered at pharmacies across Ontario.

In Sudbury, most major pharmacies like Shopper's Drug Mart have adopted this system, which is designed to not only make things more convenient for patients, but to cut down on redundant calls for physicians.

Dabliz shared a number of stories of patients who have reaped the benefits of his expertise close to their homes, instead of having to consult their family doctor or make multiple trips.

“Back in the day it would have been, ok let me fax your doctor and maybe I hear back today, tomorrow or next week, or go to the walk-in clinic. Now we can extend them generally up to six months or their next doctor's appointment. It's kind of a waste to the system for someone to be going to the clinic to get a refill on a med for just one month when they're going to be seeing that patient that month anyway.”

Ontario and British Columbia are both new to this system, while provinces like Manitoba, Alberta have been operating in this manner for some time.

“This is all pretty new to me as well,” said Thibeault. “But I think it's a great idea, it fits right into our healthcare system in Ontario and if we're already coming into pharmacies for over the counter items, it would be great to have these added options.”

Among the added options that are being pushed for are expanded vaccinations like flu shots, travel vaccines, shingles vaccines and more.

Pharmacists will also be able to prescribe meds for things like cold sores, yeast infections, as well as allergy medications that aren't available over the counter.

Dabliz explains that there is some logisitcal boundaries that need to be sorted out, but that in no way are pharmacists looking to replace doctors.

“We have no intention of stepping on doctors' toes or anything like that, we just want to make the system as efficient as possible,” said Dabliz.

“If we can lower some of the costs of the healthcare system then those costs can be used for other things. It's not so much about how much we're spending but are we spending it efficiently.”

Ontario's healthcare budget is $52 billion, and Thibeault says that anything that can streamline spending and put patients as the central focus is a positive.

While the system has been rolled out at many pharmacies across the province and in Sudbury, Dabliz says many people are still finding out about it, and in many cases, by accident.

“Just make sure you're going to the same pharmacists because if you're going all over the place then the pharmacist doesn't necessarily know you and then if there's ever an issue where there's a grey area they don't really know if they can go out on a limb and help you,” said Dabliz.

The Healthcare Closer to Home program also features smoking cessation programs and wellness counselling which provides pharmacists with the ability to demonstrate to patients the proper use of devices like glucose meters, inhalers and epi-pens.

“By expanding pharmacists’ scope of practice, we are adding healthcare centres in the form of neighbourhood pharmacies – all of which help deliver healthcare closer to home and improve access to quality care,” said Austin.

“Healthcare Closer to Home aims to showcase the patient benefits of expanded scope of practice in Ontario, as well as underscore areas where there is room for further expansion.”