Capreol chugging along with beautification project

A $25,000 donation from CN Rail to the Northern Ontario Railroad Museum and Heritage Centre will help spread the seeds of “dramatic changes” for Capreol leading up to its Centennial in 2018, said the town's councillor. Ward 7 Coun.
Sep 11, 2013 3:15 PM By: Arron Pickard 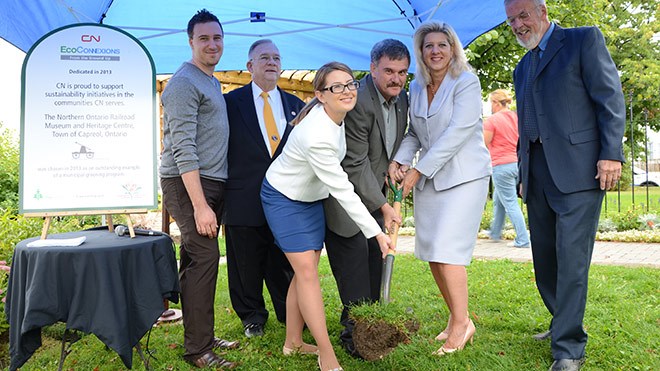 A $25,000 donation from CN Rail to the Northern Ontario Railroad Museum and Heritage Centre will help spread the seeds of “dramatic changes” for Capreol leading up to its Centennial in 2018, said the town's councillor.

Ward 7 Coun. Dave Kilgour said while he looks forward to some of the changes that will happen over the next five years, it was the announcement on Sept. 10 that was the reason for celebration as it marked the beginning of the first phase of a $50,000 project to revitalize and regreen Capreol and its downtown.

A great deal of work has already been done to help revitalize Capreol, said Cody Cacciotti, manager, NORMHC. For instance, the Garden of Life located on the grounds of the museum has proven popular with resident and visitors alike.

“Our downtown is the main gathering location for residents and the first place visitors see,” Cacciotti said. “The Garden of Life has really become a focal point for our downtown, and we've had a lot of positive feedback on our efforts to date, so we're just looking to continue that.”

Through this $50,000 project, the museum and its community partners, including the Capreol Community Action Network, the business association and local service clubs, the town will see more trees and plants put in throughout the downtown core. In addition, the museum will plant a line of trees between it and the CN rail line as an added safety measure.

“Plus, it's an opportunity to partner with two very well-respected organizations, Communities in Bloom and Trees Canada, and for us to get involved in the communities in which we operate and help them achieve their own sustainability objectives,” she said.

The proposal from the museum was one of 30 approved projects, but it was also one of 115 proposals seeking funds, said Raymond Carrière, president and founder of Communities in Bloom.

The selection committee was made up of two juries comprised of professionals from Communities in Bloom and Trees Canada. They were tasked with assessing the concept of each proposal, the design of the project, the selection of plants to be included in the project, as well as conservation efforts and community involvement.

It's a matching donation, which means the remaining $25,000 of the $50,000 project needs to be put up by the museum and its partners, either through cash donations or in-kind services, Carrière said.

Capreol is a railroad town with a very rich history, and our hope is that ... there is going to be a lot of community involvement.

“That was a very important component, because the whole concept is about creating connections within the community,” he said.

The commitment from the museum and the volunteers on the maintenance of the project was also an important factor, and because the trees will be planted between the museum and the CN rail line, it will serve as a natural barrier, which will create an element of safety.

Proposals were received from all across Canada, he said, from any community in which CN operates.

“They all look good on paper, but what's so pleasing is when they look ever better on site,” he said. “This project, from what we've seen, will look great. And, we'll be back to check on how things are progressing, and even provide advice should it be needed.”

“And when we start focusing on neighbourhoods and taking it to the next level with plants and trees, I think it will just make for a more beautiful city,” Matichuk said.

Every year, for the past 30 years, the city has been planting trees throughout Greater Sudbury as part of its regreening efforts, and that will continue, she said.

“If you look at our city 30 years ago, and I'm old enough to remember the black rock that was our landscape, it's a stark contrast,” she said. “You can have a lot of trees outside (of the communities), but you also need to bring that into the urban landscape. If you can bring that vegetation to our downtowns, Sudbury as a whole only stands to benefit.”

LU prof’s work on formation of continents published in prestigious journal
Dec 2, 2020 9:00 PM
Comments
We welcome your feedback and encourage you to share your thoughts. We ask that you be respectful of others and their points of view, refrain from personal attacks and stay on topic. To learn about our commenting policies and how we moderate, please read our Community Guidelines.