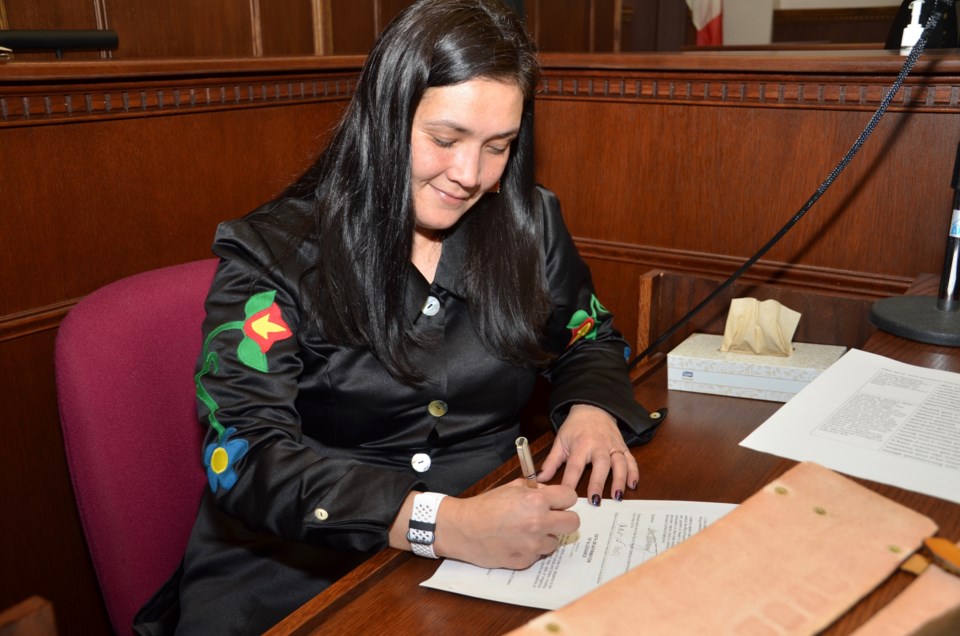 Ogimaa Kwe (Chief) Linda Debassige signs the Declaration of Office and Oath of Allegiance as First Nations Trustee with Rainbow District School Board. Trustee Debassige will represent the 11 First Nations communities who have educational service agreements with the board. (Supplied)

Debassige attended her first board meeting April 23. She will represent the 11 First Nations communities who have educational service agreements with the Board.

She replaces Grace Fox, who served as First Nations trustee with the board for many years, and retired from the position after the last trustee election in the fall.

“I would like to extend a warm welcome to Chief Debassige as she begins her new role as Trustee for Rainbow District School Board,” said board chair Doreen Dewar, in a press release.

“We value our relationship with First Nations and look forward to working with Trustee Debassige for the benefit of all students in Rainbow Schools.”

I look forward to strengthening the relationship between Rainbow District School Board and the First Nations for the benefit of our children. I have received a warm welcome from Chair Dewar and look forward to working with her and fellow trustees in inspiring success for all students by reaching minds and touching hearts.”

Debassige was born and raised in M’Chigeeng First Nation, where she grew up on the land and is active in the sustainability of Mother Earth.

She graduated with honours from Confederation College’s Civil Engineering Technology program in Thunder Bay. She has one son, Pierre, who attends Manitoulin Secondary School.

Debassige has participated in numerous speaking engagements, University Policy Forums and media events. She is also on the Board of Directors of the Noojmowin Teg Health Centre, Mnidoo Mnising Power General Partnership Inc., Ojibwe Cultural Foundation, and is a Trustee with the Robinson Huron Treaty.

Debassige is a past member of the Board of Directors for the UCCM Anishinabe Police Services, Great Spirit Circle Trail and Manitoulin Hotel and Conference Centre.

She enjoys hunting, fishing and sports. In her spare time, she also enjoys being out in the woods and spending time with family.

Bombardier begins ventilator production at Thunder Bay
Jun 1, 2020 8:00 PM
Comments
We welcome your feedback and encourage you to share your thoughts. We ask that you be respectful of others and their points of view, refrain from personal attacks and stay on topic. To learn about our commenting policies and how we moderate, please read our Community Guidelines.