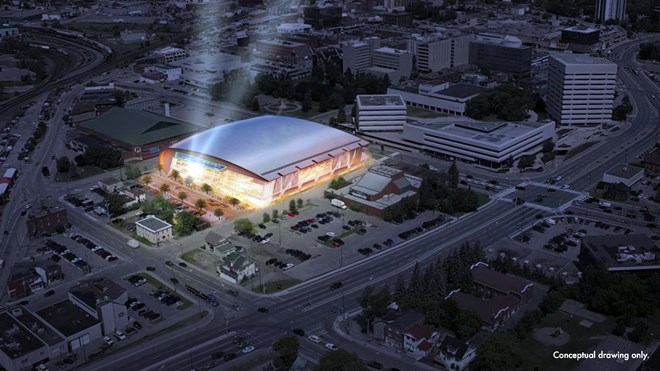 The city isn't following its main planning document when it comes to the Kingsway Entertainment District, says the managing director of the Downtown Village Development Corporation. (File)

The city isn't following its main planning document when it comes to the Kingsway Entertainment District, says the managing director of the Downtown Village Development Corporation.

In a letter to Sudbury.com, Susan Thompson took issue with Section 19 of the Official Plan, which requires major projects to be financially sustainable. Thompson's letter comes a few days before the Jan. 22 public hearing on rezoning the Kingsway site to permit the $100-million arena and a proposed $60-million casino.

The meeting is the first of two public hearings before the rezoning of the arena and an Official Plan amendment for the casino are voted on by the planning committee.

“While our Official Plan has many provisions that should disqualify these re-zoning applications from going forward, I will focus on the event centre/arena application and council’s obligation to be fiscally responsible to the taxpayers in Greater Sudbury,” Thompson writes in her letter.

“What is most troubling is the fact that the City of Greater Sudbury taxpayers will be on the hook for well in excess of $100 million to service and develop a site on the edge of town, in close proximity to a landfill site, with major parking and transportation challenges and major infrastructure spending requirements.”

Moving the arena out of downtown will “further undermine the vitality of the city’s historic core that was meant to be the major priority for investment,” Thompson said in the letter.

“How did we get to a place where the citizens of Greater Sudbury are being asked to support a plan where taxpayers will be on the hook for well over $100 million while the proponent has a downside risk of $100,000?” she wrote. “The Sudbury Wolves attendance is way down, thousands of residents and business owners have signed letters of support against the Kingsway site and yet these numbers are never accurately reflected to the public.

“These are not individuals and businesses who are opposed to growth in our city but rather those who understand that the location of this project is the wrong one to choose if we are ever to achieve longer term sustainability as a city.”

Thompson said no studies have been done to show the Kingsway site is financially sustainable, and the financial impact of moving the arena out of downtown also hasn't been assessed.

"They will make their findings and recommendations and give those to council,” she said. "Every project fits into the Official Plan differently and it's up to the planning department to determine what that is, and then to council to determine what to do with those findings."

A report on how the plan conforms to the Official Plan – including Section 19 — will be ready for council's consideration before the second public hearing is held on the projects, Sheppard said.

"All of that information is coming,” she said. “It's all part of the process for any project like this. It will happen for other projects, too. If it doesn't fit into Section 19, then they will have notes on why it doesn't. And then council would have to make a decision based on those things, on how to proceed.

"It's important, but Section 19 is just one piece. This project is so much bigger than Section 19, it's the entire Official Plan."