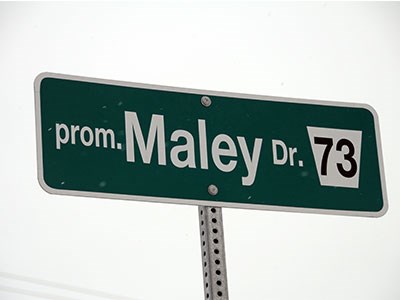 Greater Sudbury doesn't yet own all the land where it's currently building the $80 million Maley Drive extension, Sudbury.com has learned. It is negotiating with Dalron Construction to buy the final piece of property, near Montrose Avenue. (File)

While it's nearly complete and on budget, Greater Sudbury doesn't yet own all the land where it's currently building the $80-million Maley Drive extension, Sudbury.com has learned.

City council has been briefed on the situation in closed-door meetings as staff try to finalize the purchase of the property, which is a strip roughly one kilometre in length and located in the Montrose Avenue area of the project.

Multiple sources say the issue arose when the design for the roadway was changed slightly to build on land better suited for the road, and to better align the extension.

In an email, Tony Cecutti, the city's GM of infrastructure, said the situation with Maley Drive is not a cause for concern.

“We don't currently own all the property for the Maley Drive extension project, but it isn’t uncommon for land acquisition discussions to be ongoing while construction projects remain underway,” Cecutti said.

“We’re not able to speak to real estate negotiations — those matters are discussed in camera,” Sheppard said. “I do know the Maley Drive project is continuing to progress well. We remain on time, on budget and we look forward to the grand opening later this year.”

Daryl Gonsalves, stakeholder relations and policy officer with the Canadian Council for Public-Private Partnerships, said while Maley is not a P3 project, the council is familiar with overseeing major construction projects like the extension.

Finalizing land purchases while construction is ongoing is not unusual, he said, but there is some risk.

“From what I understand, what they are doing with the road is not unusual. They probably have an idea that the land will be acquired but they need time for the documents to be arranged.”

The land is owned by Sudbury developer Dalron Construction who, sources say, is not happy the city has cleared the land and used aggregate from the property for Maley when no agreement to sell the property has been struck.

On Wednesday, Dalron vice-president Kristi Arnold said she appreciated the opportunity to comment, but the company has nothing to say right now about the situation.

The real estate issue aside, Maley is set to open to the public in December, bringing roundabouts to the city for the first time. A $4-million budget surplus is also allowing more of Maley to be four-laned – from Barrydowne Road to Lansing Avenue, where one of the roundabouts is being constructed.

The first phase, worth $21 million, saw an interchange built and a realignment of Notre Dame Avenue, and was completed last winter. The next phase, worth $44 million, built the road from Frood Road to Barrydowne Road and should be completed by the end of the year.

The last part of the project will rebuild Maley Drive from Barrydowne Road to the Falconbridge Highway, and it's also scheduled to be completed by the end of 2019.

The extension will link Barrydowne Road to the Lasalle Extension near Collège Boréal. It will allow heavy ore trucks to avoid Lasalle Boulevard, MR80 and MR15, and will reduce congestion and wear and tear on The Kingsway.

More about the project can be found here.