“We thank residents for their understanding and look forward to celebrating our Olympic athletes at the celebration’s new date, likely later this spring or early summer,” said a statement from the city Monday.
0
Apr 14, 2014 6:49 PM By: Darren MacDonald 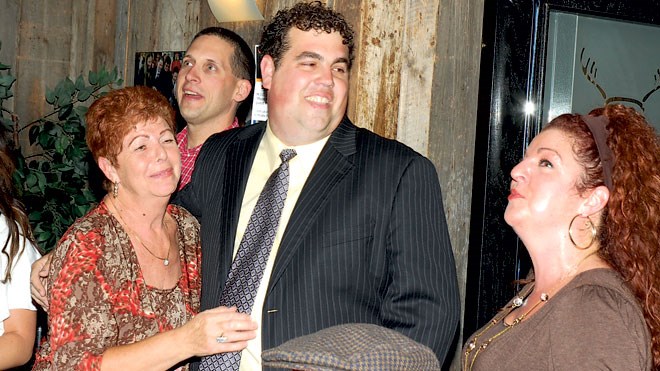 With his arm around his mother, Franca, while he smiles at his sister, Sabrina Cimino, Ward 8 Coun. Fabio Belli celebrates his election win in 2010. The 37-year-old popular city councillor died suddenly in Florida on April 12 from an apparent heart attack. File photo.
“We thank residents for their understanding and look forward to celebrating our Olympic athletes at the celebration’s new date, likely later this spring or early summer,” said a statement from the city Monday.

Tributes have been pouring in for Belli since Saturday, when word spread he had passed away. He is survived by his wife, Susan, and young daughters Emma and Brianna.

On his Facebook page, Ward 1 Coun. Joe Cimino said he was devastated by the news.

“We have lost a great man who was dedicated to his community and whose family meant the world to him,” Cimino wrote. “I love you Fabio and you will never be forgotten. May you rest in peace.”

“Fabio was a good man who loved his family, his friends and his community,” Sudbury MPP Rick Bartolucci said in his statement. “He always represented his constituents with class, determination and dedication. He will be missed by everyone who knew him.”

Mayor Marianne Matichuk said she and the rest of city council are grieving for Belli's family.

“On behalf of city council, I send my deepest condolences to Fabio’s wife, children, family and friends at this very difficult time,” said Matichuk. “Fabio’s passion and his determination to work for our community will be dearly missed.”

Belli's love of sports was well known, and he was co-founder and director of the Sudbury Panhellenic Soccer Tournament, now the Greater Sudbury Impact Soccer Tournament — the largest soccer tournament in Northern Ontario. He owned Just Soccer, among other businesses, and was a big booster of the Sudbury Wolves, where he operated the team's souvenir shop during games on behalf of Skater's Edge.

“We lost a personal friend and a very good friend of the Sudbury Wolves,” said Sudbury Wolves' President Blaine Smith on the team's website. “It is because of people like Fabio that OHL hockey continues to thrive in Greater Sudbury.

“Fabio was like the 'King of Kensington' at our home games as he socialized with fans, players, parents, billets, sponsors, season ticket holders and citizens. Fabio was a good friend to many and he will be dearly missed by everyone associated with the Sudbury Wolves.”

Belli's family was the billet home for Wolves' forward Mathew Campagna, who wrote Belli a heartfelt tribute on Facebook.

“Here's to the man I love dearly, Fabio,” Campagna wrote. “He was a father figure to me and my best friend. He was always there for me and took care of me like I was his own son.

“You brought me into your house four years ago and I'll never be able to repay you back for bringing me in and taking care of me. I love you and will miss you forever.”

Belli's health first made headlines in mid-November last year when he suffered a stroke. But less than a day later, he was tweeting from his hospital bed, saying he expected to make a full recovery and was already missing city hall.

“I wish I was there,” Belli said on Twitter. “I'll be back very soon.”

He returned in January, vowing to make healthy lifestyle changes after having dropped 30 pounds. He said he was feeling great.

“You're young – this should not be happening,” Belli said his doctor told him about his stroke. “I (was) taking things for granted, but I knew I had to make changes in my life ... I had been overweight, not very active, and I had to make some changes – life changes.”

Despite his health setbacks, Belli was the first incumbent on city council to file to run for re-election, and talked about how much he loved being a politician.

He was elected in Ward 8 in 2010, beating nine other candidates in the ward that was left vacant when incumbent Ted Callaghan ran for mayor. Despite the crowded slate, Belli won with 1,991 votes, more than twice as many as the nearest challenger.

He was a graduate from St. Charles College and earned a diploma from Cambrian College in business management. In addition to Just Soccer, he also owned BMI Custom Apparel & Promotional Products and T-Zone Vibration.

Always passionate about sports, Belli was working on a multi-million-dollar domed sports facility for St. Charles College when he passed away. After a few years of hard work, he was set to announce next month that funding was in place for the facility and construction would begin this spring.