Some city councillors have some big concerns about plans to build a sports dome at Lasalle Secondary School.
Jul 11, 2018 6:00 PM By: Darren MacDonald 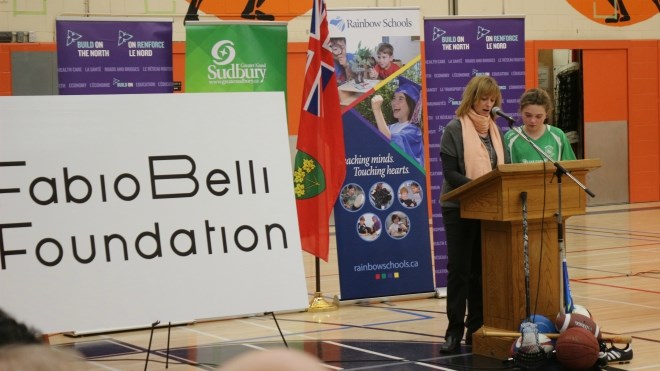 One of the last local funding announcements by the former Liberal government was $4 million last April for a facility to be named in honour of the late Fabio Belli, a city councillor who championed the project before his death in 2014. (File)

Some city councillors have some big concerns about plans to build a sports dome at Lasalle Secondary School.

One of the last local funding announcements by the former Liberal government was $4 million last April for a facility to be named in honour of the late Fabio Belli, a city councillor who championed the project before his death in 2014.

But since the April announcement, it has emerged the city is being asked to pay for $2.2 million in road improvements, part of which will be on school property.

And this week, the Conseil scolaire catholique du Nouvel-Ontario (French Catholic board) announced plans to build a dome of its own at Sacre-Coeur school, in partnership with the Sudbury District Sports Club, which received a $3 million private donation in 2016 for the dome.

Meeting on Tuesday, councillors were asked to approving prepare a business case for the $2.95 million request, which would then be part of the 2019 budget deliberations.

But Ward 12 Coun. Joscelyne Landry-Altmann wondered why the city would pay for road work on school property. With the provincial Liberals out and Doug Ford's Conservatives in power, Landry-Altmann also said the $4 million is no longer a sure thing.

“Let's face it, the scenario has changed ... at the provincial level,” she said. “I think it's important that we get verification that the funding is in place.”

With the second dome proposal now public, Landry-Altmann said council should delay a decision until their August meeting to give staff time to determine whether the $4 million commitment will be honoured.

“I would love to have two bubbles, no doubt about it. But my fear is we'll lose both.”

Ward 11 Coun Lynne Reynolds said it's time to review the entire issue. She's heard from a lot of residents unhappy with what's going on.

“They do not want taxpayers money spent on this,” Reynolds said, and she's not pleased the city would be spending money on  someone else's road.

They owe it to taxpayers to “look at both proposals,” she said, adding she prefers the Sacre-Coeur plan because it's more centrally located, and wouldn't cost tax dollars.

But Ward 8 Coun. Al Sizer, who succeeded Belli and has made the dome a priority, said all they were asked to approve is a business plan, not actual funding.

And Ward 7 Coun. Mike Jakubo said the second dome can continue with its plans, since they don't want city funding.

“Is the Ford government going to slash the $4 million? We don't know that right now,” Jakubo said. “In January, we will. We have to make sure that in a year or two year's time, we have a soccer dome in Greater Sudbury.”