Work on a 112-unit condominium project encompassing seven buildings on the edge of downtown Sudbury could begin as early as next fall.
0
Oct 12, 2012 2:47 PM By: Darren MacDonald 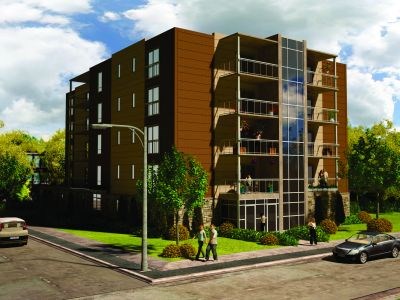 A conceptual drawing shows what could be one of seven condominium buildings built in downtown Sudbury as part of a $35-million development. Supplied graphic.

Work on a 112-unit condominium project encompassing seven buildings on the edge of downtown Sudbury could begin as early as next fall.

Tom Corbett, president of Options for Homes Greater Sudbury, announced details of The Village on Mackenzie at a press conference Oct. 10. The $35-million project will replace the former St. Louis de Gonzague School building, which has been closed for decades.

“We had two feasibility studies done … and their assessment was that, first of all, this building has supported the brick outside,” he said. “The heat from the building supports the brick. If we were to insulate the inside, that brick would fail. So we would have to close off the outside, which would defeat the purpose of preserving this building. It wouldn’t be the same building.

“The other point is, when you look at the feasibility study, you’re looking at $6 million to $7 million to renovate this building. Each one of those (apartment) clusters is $5 million. So what you end up with is 48 units, instead of seven buildings each with 16 units. So it wasn’t feasible.”

If it goes ahead, Corbett said it would be the biggest single development in 30 years in downtown Sudbury. Each building would have 16 units with two bedrooms each, two bathrooms and a parking space located inside the building. An additional 60 parking spaces would be located on the property. Each until would sell for just under $300,000.

“A $35-million condominium development, it will be a real game-changer for the centre of our city,” Corbett said. “We believe our development is perfectly aligned with the development that is happening and that is planned for the downtown.”

Those developments include the new school of architecture, the new art gallery, the casino and arts and convention centre.

“We are an easy walking distance from all the services available downtown,” he said. “It’s an ideal situation for residents who want no upkeep, a turnkey situation if they want to travel.”

So far, six units have been spoken for, Corbett said. Before they begin construction on the first building, 14 of the 16 units have to be sold. The goal is to begin work in fall 2013.

A $35-million condominium development, it will be a real game-changer for the centre of our city.

“Our smallest unit is 1,080 square feet, with even more living space if you count our decks and balconies.”

Corbett thanked the Downtown Village Development Corporation and its managing director, Susan Thompson, who attended the press conference. Thompson said The Village on Mackenzie is a perfect complement to what’s going on downtown.

“This residential project will provide an attractive urban lifestyle option that simply has not been available to date,” Thompson said. “Not only will this project act as the residential pillar to the Downtown Master Plan, we believe that it will serve to boost investor confidence and serve as a major catalyst for further development.”

Corbett has owned property for five years, and had planned an earlier development that was derailed by the recession.

“Now we’re looking at a buoyant residential market,” he said. “We feel there will be much better demand.”

The buildings will be erected using unique moulds imported from Germany. Once the moulds arrive, the concrete will be poured in a Guelph factory and shipped to Sudbury. The first building will take the longest, Corbett said, because it will take about six months for the moulds to arrive once they’re ordered.

“Just because of the learning process, as the first building goes up, the rest will take less time to erect,” added Dan Brouillette, who also works for Options for Homes Greater Sudbury. “There’s very good sound resistance, because one person’s ceiling isn’t another person’s floor. The ceiling is your ceiling, then there’s space, and then there’s someone else’s floor.”

“It’s all concrete, so it’s going to last forever,” Corbett said. “All the floors have in-floor heating; all of the walls have the electrical and mechanical in them when they arrive … The quality is very, very good.”

The development purposely left out amenities to keep costs down and to encourage residents to be part of the downtown community, Brouillette said.

“It’s designed for downtown, to have people take part in their community through this very large outdoor space that is very usable,” he said. “Everything is a five-minute walk away from this location, whether you want to go to Ribfest, to Sudbury Arena or to go swimming.

“This is meant to benefit the neighbourhood, and to benefit people who invest in their homes.”