Sudbury Transit users on Dow Drive in Copper Cliff have lost their three bus stops for a week or two while the city waits for the property owner to fix the road.
0
Mar 21, 2016 9:04 PM By: Darren MacDonald 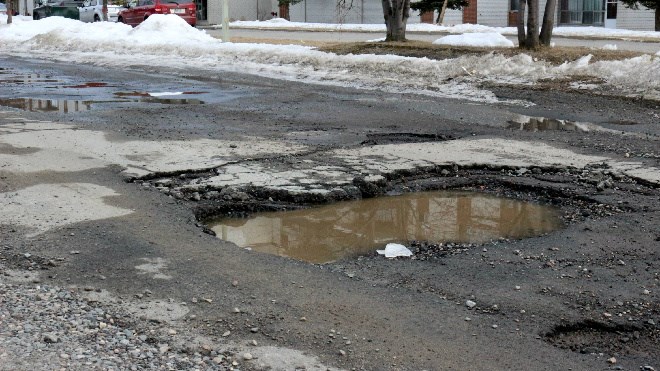 Sudbury Transit users on Dow Drive in Copper Cliff have lost their three bus stops for a week or two while the city waits for the property owner to fix the road. Darren MacDonald photo.

Sudbury Transit users on Dow Drive in Copper Cliff have lost their three bus stops for a week or two while the city waits for the property owner to fix the road.

The Toronto-based owner of Copper Cliff Gardens, an apartment and townhouse complex off Power Street, owns Dow Drive, but has an agreement with the city for transit stops.

The owners are responsible for snow plowing and road maintenance on the road, and each spring the road is pitted with potholes, much like other streets in the city.

But city spokesperson Shannon Dowling said the road is so bad this year, they were risking damage to city buses if they kept serving the stops.

"The road in there is pretty rough," Dowling said. "So anyone who uses those three stops are going to have to go to (the Sudbury Transit stop on) Cobalt and Power."

Potholes are a problem every spring in Sudbury, and city crews – known as the pothole patrol – go out and fill as many as they can. The city received more than 3,000 complaints in 2015 alone.

Rob Gauthier, the city's manager of transit operations, said the owners of Copper Cliff Gardens were given warning that if the holes in the road weren't fixed, transit would have to stop servicing the route. They gave them a deadline, which passed last Thursday.

"We had called a few days before asking them to see what they could do," Gauthier said.

It's a problem that occurs every spring, he said, and normally the owners fill the holes with gravel.

"But the company said they wanted to wait,” he said. “They don't want to make a mess with gravel, they want to wait till it's warmed up a little bit and they can (fix the road) more permanently.

"They said it might be a week or two, but they'll fix it as soon as they get the chance."

Gauthier said it became too risky to keep running buses in the area, since the crater-sized holes can be hard to navigate, and hard to spot when it rains and they fill with water.

Gauthier said it's the only route in the city where buses travel on a private road to pick up passengers.

"There's a lot of townhouses and a big apartment block, so there is enough ridership there to warrant going there," he said. "I told them to let us know when it's fixed, and the buses will be back on those routes within 15 minutes."