Councillors requesting a closer look at renovation of downtown arena 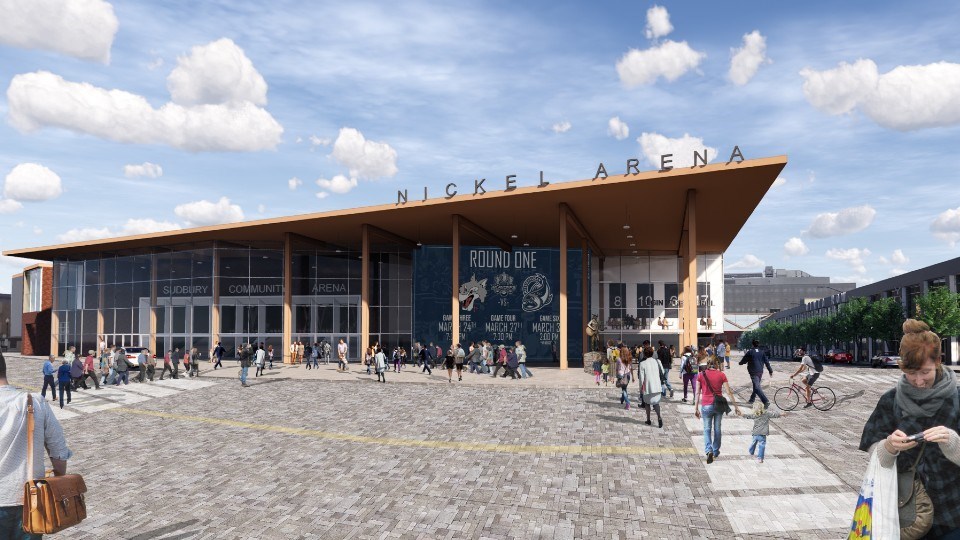 3rdLine.Studio has developed a new vision for the Sudbury Community Arena as part of what they have deemed Project NOW. (File)

A pair of Greater Sudbury councillors are bringing forward a motion requesting that staff take a closer look at a proposal that promises to save the city $40 million.

Sudbury-based architecture firm 3rdLine.Studio released its vision for the Sudbury Community Arena in June, with a proposal dubbed Project NOW.

Ward 4 coun. Geoff McCausland and Ward 1 coun. Mark Signoretti will be tabling a members' motion at city council on Sept. 8, asking staff to evaluate the Project NOW plan and report back to council at the Oct. 6 meeting of council.

The proposed plan promises $40 million in savings compared to a new arena build through a massive overhaul of the existing downtown arena that would include expanding and upgrading the public entryways, creating a new concourse, new loading access and event support spaces, as well as adding 450 indoor parking spaces adjacent to the arena.

While 3rdLine has never formally presented their proposed renovation to city council, McCausland explained that the motion he and Signoretti are bringing forward is part of council's due dilligence in taking a closer look at all of the options that are out there.

"The main thing is, this has been out in the community, this idea that Project NOW has developed and put out there with the tagline that it has the potential to save the city $40 million," said McCausland. "I'm hoping that we can respond to that and address it because we haven't really had the opportunity to do that yet."

According to the cost model on projectnow.info, the total construction costs associated with the arena are estimated at $55 million. The arena costs do not include the nearly $35 million price tag attached to constructing a parking structure and nearby commercial development; meaning the total project cost is around $90 million, or $10 million less than the proposed Kingsway arena/event centre.

"The motion is an investigation to determine whether this is accurate and whether the numbers add up and if it's actually feasible within the timeline and the way they're talking about it and report back to council, said McCausland.

"We want it to be presented back to council as apples to apples and not apples to oranges."

To date, 3rdLine's message has largely been driven through social media campaigns, press releases and 3D drawings and video tours of what a renovated downtown arena could look like. With no formal presentations made to council, the architecture firm isn't technically in the running to make any type of pitch for what the city should be doing with its downtown arena.

"My thought is whether it's parks services, or water/wastewater or any aspect of our business, I'd like to think that if any community group is going to put a bunch of time and energy and put something out there that could potentially save the city and everyone in it millions of dollars, then we as a council should give that some consideration," said McCausland.

"I'd definitely be happy to see it come forward officially through the normal channels, but it hasn't materialized naturally so what I'm saying is this is out there, we need to acknowledge it and to explore this a little bit to determine that, whether it's true or not we need to at least dispell the myth that city council is not responding to potential savings of tens of millions of dollars."

Development of the Kingsway Entertainment District has been at a standstill for months, entangled in Superior Court hearings held on June 29 and June 30, with a two-day LPAT hearing scheduled for Sept. 17 and 18.

Both McCausland and Signoretti have been vocally opposed to the Kingsway Entertainment District, though McCausland was not part of the council that voted in favour of the KED in 2017.

"I've been very vocal and everyone is going to say this is another stall tactic on the KED, but I want to make it clear this has zero relevance to the KED," said Signoretti.

"This has been out there for three months now and we felt it was important that this information came forward in some fashion."

Signoretti says that the Project NOW proposal is not pie in the sky and that there are concrete numbers that are worth giving a closer look.

"In my opinion this should've been looked at back in 2017 as an option for the city," said Signoretti. "We'd be remiss not to take a look at this and we as councillors should be trying to find any savings possible for the city of Greater Sudbury."

Public Health Sudbury announces area's 114th confirmed COVID-19 case
Oct 21, 2020 7:10 PM
Comments
We welcome your feedback and encourage you to share your thoughts. We ask that you be respectful of others and their points of view, refrain from personal attacks and stay on topic. To learn about our commenting policies and how we moderate, please read our Community Guidelines.