Laurentian University economics professor David Robinson says he will seek the Green Party nomination for the federal election, but does not expect he will get elected if he runs.
Nov 17, 2014 8:09 PM By: Jonathan Migneault 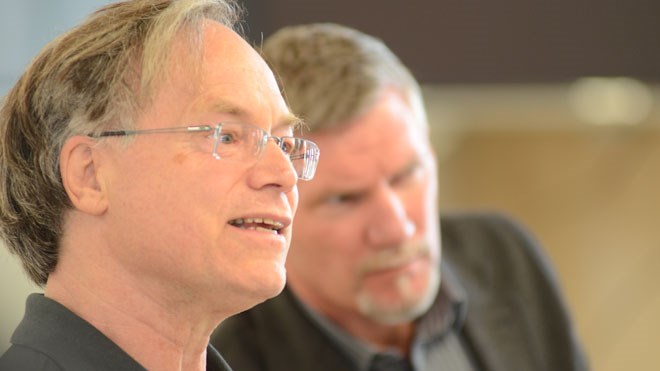 Laurentian University economics professor David Robinson speaks at the 2014 launch of the Vital Signs Report. Robinson says he plans to run for the Green Party to bring the issue of climate change front and centre during the federal election. File photo.
Laurentian University economics professor David Robinson says he will seek the Green Party nomination for the federal election, but does not expect he will get elected if he runs.

“I see this more as putting pressure on the parties than me getting elected,” Robinson said. “What I expect to do is push my friends in various parties here to taking the issue (of climate change) a lot more seriously.”

Robinson said the threat climate change poses convinced him it was time to throw his hat into the political ring.

“Like a lot of guys my age, I'm actually really terrified about the future for my kids and grandchildren,” he said. “I'm feeling like I'm old, and at the end of my career, and I bloody well better do something useful.”

Robinson, who has been an NDP member since the 1960s, said he switched to the Green Party when he realized he and party leader Thomas Mulcair did not see eye to eye on climate change.

“My view is that a cap and trade system is not going to work, and a carbon tax is going to work. He didn't agree with me,” Robinson said, referring to a discussion he had with Mulcair before he was named NDP leader.

Robinson said he has also taken issue with the recent push from the provincial NDP to impose a gas tax rebate in the North.

“That's just backwards,” Robinson said. “If you want to support the North, that's the worst way to do it in terms of climate.”

Last April, Robinson became a member of the Green Party's shadow cabinet, and was named the party's natural resources critic.

He said it has been more of an advisory role, and has given him a chance to promote Northern Ontario interests regarding natural resources.

Robinson said he was pleasantly surprised the Green Party was not anti-mining, but instead promoted responsible natural resource extraction.

“They've got a pretty decent policy on that,” he said.