When Tammy Bellamy was diagnosed with Lewy body dementia, one of her first reactions was shame. “The stigma is terrible,” she said. “Everyone automatically devalues everything you say. Your opinion is not worth anything.
0
Jan 10, 2016 7:04 PM By: Jonathan Migneault 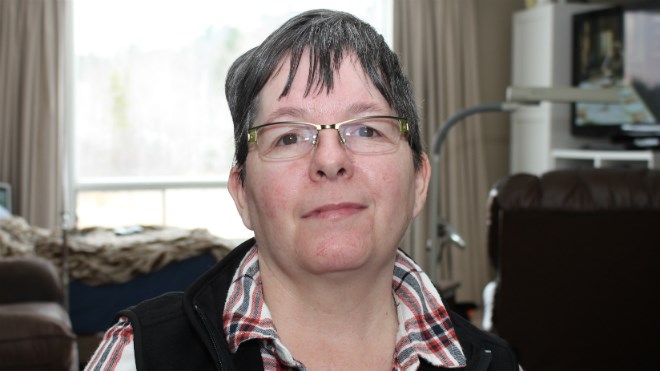 “The stigma is terrible,” she said. “Everyone automatically devalues everything you say. Your opinion is not worth anything.”

Bellamy worked at Costco at the time of her diagnosis. She was only 47.

She was the store's go-to person for the internal computer system, and often trained new staff members to use the system.

But one day she forgot how to use the system, and soon had to prepare a cheat sheet just to get by in her job.

The employees she had trained started to question her ability, and that uncertainty convinced her to see a doctor.

At first doctors thought she may have been depressed or dealing with severe anxiety.

But she had other symptoms that contradicted those theories.

Bellamy said she started to smell strong odours – like perfumes and sewage – when she wasn't near anything that would produce those smells.

She also started to experience hallucinations, and to see people who weren't actually in her vicinity.

It is the second most common type of progressive dementia, after Alzheimer's disease, and can cause the hallucinations Bellamy had experienced.

With her diagnosis she had to quit her job and had her driver's licence taken away.

Bellamy lives in Wahnapitae, and must depend on her husband John, if she wants to leave the house.

She does not qualify for the city's Handi-Transit service because it does not serve people with cognitive impairment.

Bellamy is 55 today, and said the perception most people have of dementia discounts people her age, and with her relative ability to function.

“Alzheimer's (research) has only been able to raise good money by pointing to the person sitting in the corner, drooling, because that brings sympathy,” she said.

To find a support group with other people around her age, Bellamy said she had to look online.

Dementia Alliance International, which allowed her to connect with others online, helped her out of a difficult period in her life where she considered suicide as her only option.

“Your quality of life goes downhill,” she said.

More recently, Bellamy has worked with the Alzheimer Society Sudbury-Manitoulin North Bay and Districts to start a monthly support group more suited to people in her position.

The group meets at the Alzheimer Society offices, located at 906B Notre Dame Avenue, the last Wednesday of every month at 7 p.m.

“Our perception of dementia itself, is that everybody's old so why bother, because they going to die anyway,” she said.

The Alzheimer Society launched a new campaign in January called #StillHere, meant to change that perception and reduce stigma, which encourages people to seek help sooner.

“When they come to us they're often in the late-middle stage,” LeBlanc said. “If we could get to them earlier we could prepare and educate the person and family so they can seamlessly help and support the person as the disease progresses.”

Pia Kontos, a senior scientist with the Toronto Rehabilitation Institute-University Health Network, has dedicated her research to changing public perceptions as well.

“I challenge the assumption that people with dementia cease to be persons,” she said.

Kontos said that even with advanced dementia, and after losing the ability to communicate verbally, people can still express themselves in meaningful ways.

She gave the example of an elderly man who lived in a long-term care home, and would hit people if they were wearing a hat in the dinning area.

“That was his way of expressing how offensive that was to his own sensibility,” she said.

Kontos has trained caregivers to understand non-verbal cues and improve their interactions with dementia patients.

“We are investing so many research dollars in finding a cure, and I think much more needs to be done in supporting the quality of life and well-being of people who are living with this illness,” she said.