Diamonds in the Rough: Meet Canada's all-female mine rescue team

Team competed at international event against mine rescue teams from around the world last year in Russia
Apr 12, 2019 1:00 PM By: Len Gilllis 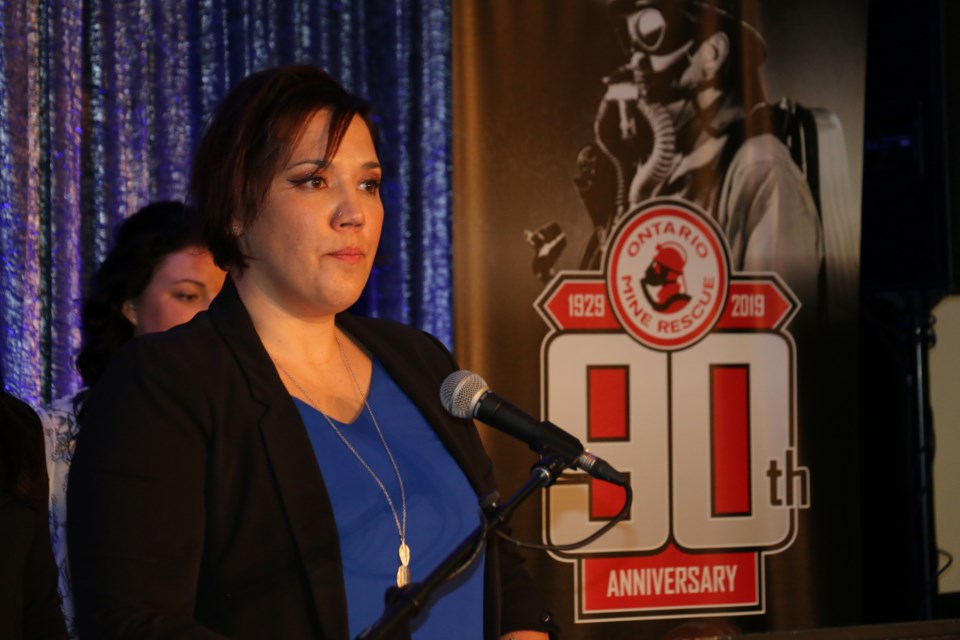 Mine rescuer Kari Lentowicz, centre,  was one of the speakers this week at the annual Workplace Safety North Mining Health and Safety conference. She is a member of the Diamonds In The Rough all-female mine rescue team which represented Canada at the international mine rescue competition in Russia last fall. Lentowicz said she attended the same event in Sudbury in 2016 and was inspired at that time to create the all-women team. (Len Gillis/Sudburyminingsolutions.com)

It was what happened in Sudbury three years ago that inspired a group of women to do something that had made them the darlings of the mine rescue world.

Mine rescuer Kari Lentowicz of Saskatchewan was in Sudbury this week and remembered it well.

“Back in 2016 we were here in Sudbury at the International Mines Rescue Competition,” said Lentowicz on Wednesday when she spoke at the Workplace Safety North Mining Health and Safety conference.

“In that competition there were 189 competitors. Five were women. That was it.”

That’s what prompted her to sit down with a group of friends and other mine rescue women to talk about creating their own all-female team of certified mine rescuers, something Lentowicz had been thinking about for several years.

Although mine rescue is a volunteer pursuit in Canada, members are drawn from the ranks of mine workers to take the intense training required provide underground firefighting and life-saving rescue work.

In 2017 Lentowicz recalled being at the 2017 National Western Regional mine rescue competition in Fernie, British Columbia.

“It’s where we saw the first female participating in the underground portion of the competition.”

She said she met that woman, Heather MacKenzie, a  couple of days later during the awards banquet and she agreed to join the effort to build a female competition team.

“We figured, you know what, if we’re going to do this, let’s do this right,” said Lentowicz.

In 2018, the group formed themselves as a non-profit organization and embarked on a fundraising goal so the team could participate in the IMRC event which was being held in Russia. It was a first.

She said the group members, who work in a variety of mining roles, made the decision to take the training so they could participate.

One of the challenges was finding women, said Lentowicz, revealing the current team is made up from woman across Canada. The team members include Janie Blanchette, Jodi Brasch, Renae Campbell, Naomi Fugle, Jennifer Hingston, Fanny Laporte, and Heather MacKenzie,

They come from such places as Val d’Or, Quebec; Saskatoon, Yellowknife, Montreal, Snow Lake, Manitoba. They work for such companies as Cameco Corporation, Agnico Eagle, Levitt Safety, and Rio Tinto’s Diavik Diamond Mine.
Lentowicz reminded the Sudbury audience for that the longest time, women were not allowed to work underground in Canadian mines. That changed in the 1970s.

“In fact for seven of the participating countries in the International Mines Rescue Competition, just in this part year it is still illegal for women to work underground,” she said.

Lentowicz said in the early years in the 1970s and 1980s Canadian women were “tolerated” in mining, but there was never a lot of encouragement for women to seek a mining career. She said that has changed in recent years.

“Now we are at the point where women are needed,” she said. “And it is so great to see that there is a lot of male support out there,  because without you men, we just simply couldn’t do it on our own.

“So we want to make sure that through our platform we raise awareness. Part of that is education, and includes public speaking events like this, training programs, competition events and youth engagement.”

She added it is the team’s hope to change attitudes and to encourage more young women to seek careers in the mining industry.

For what it’s worth, the Diamonds succeeded in becoming the first ever all-female mine rescue team to participate in the international event which was held last September in Ekaterinaburg in Russia, against 24 other teams from around the world.

The Diamonds came 15th overall and in doing so they beat out the only other Canadian team; the Ontario provincial mine rescue champions from the Tahoe Canada mine in Timmins.