A few hundred people took to the streets in Sudbury's South End on Sunday morning to raise awareness about Down syndrome. The Go21 Walk was previously known as the Buddy Walk.
Nov 2, 2015 12:16 AM By: Darren MacDonald 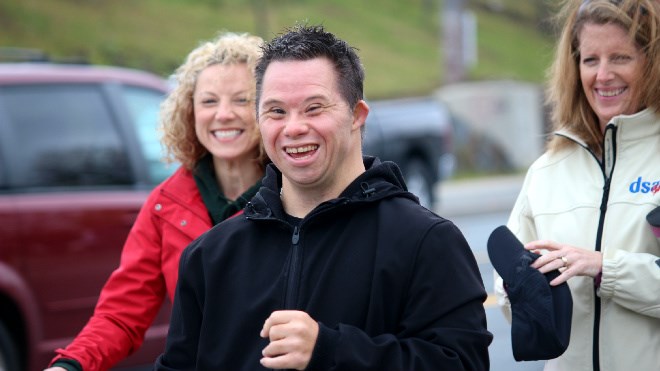 Sudbury's edition of the Go21 Walk -- previously known as the Buddy Walk, an annual event held across Canada during national Down Syndrome Awareness Week -- took place Sunday morning at Lockerby Composite High School, with marchers heading up Walford Road to Paris Street and back again. Photos by Darren MacDonald.
A few hundred people took to the streets in Sudbury's South End on Sunday morning to raise awareness about Down syndrome.

The Go21 Walk was previously known as the Buddy Walk. The annual event is held across Canada during national Down Syndrome Awareness Week, which began Nov. 1.

Julie Contini, president of the Down Syndrome Association of Sudbury, said the new name better reflects what the event is all about.

"It's a new movement that's happening from the Canadian Down Syndrome Society,” Contini said. “Twenty-one is significant because people with Down syndrome have that extra chromosome on the 21st chromosome. And then the Go part is like a cheer -- we want to cheer people on and let them know we're raising awareness and that our kids are capable and able to be meaningful part of the community."

The event is not formally a fundraiser, but is aimed at raising awareness about Down syndrome and dispelling the myths. It's also an important opportunity for families impacted by Down syndrome to socialize and support one another.

"That's very important,” she said. “It's not a very big group up here -- we have about 55 members and families who are part of it in the Greater Sudbury area. So it's very important that we are raising awareness and get our families together."

In addition to Sunday's event, Contini said they participate in World Down Syndrome Day events, as well as events in the summer and Christmas events.

“And we have a new parent group and we also offer other supports to parents who might need help with their kids," she said."It's very important that they can get together and feel that support and feel they're part of the community ... We just want people to come out and enjoy the walk and enjoy the time."

Paula Cunningham and Drew Martin, parents of Evan, 2 1/2, said the walk is a good opportunity to dispel some of the myths surrounding Down syndrome.

"We're showing that people with Down syndrome can do anything -- including throw huge events," Cunningham said.

"There are a lot of myths out there -- that people with Down syndrome can't do anything, that they're vegetables sitting at home. We know for a fact that's not true -- our kid is in (pre)school. He's fantastic. He can do anything.

"He went trick or treating last night for Halloween."

Martin said Evan is “full of energy always,” and deserves the same opportunities as anyone else his age.

"So it's awareness and, basically, that we're part of the community," he said.

Cunningham said this is the third walk they've taken part in, and it provides them with a boost every time.

According to the Canadian Down Syndrome Society website, Down syndrome is a naturally occurring chromosomal arrangement “that has always been a part of the human condition.

“The occurrence of Down syndrome is universal across racial and gender lines, and it is present in approximately one in 781 births in Canada,” the website says.

Down syndrome commonly results in an effect on learning style, although the differences are highly variable and individualistic, just as in the physical characteristics or health concerns. The most significant challenge is to find the most effective, productive methods of teaching each individual. The identification of the best methods of teaching each particular child ideally begins soon after birth, through early intervention programs.