If there’s one thing Roger Jackson wished more people knew about Down syndrome, it’s that people with the condition are people first, with a range of abilities and interests, just like everybody else.
Nov 4, 2012 11:55 PM By: Darren MacDonald 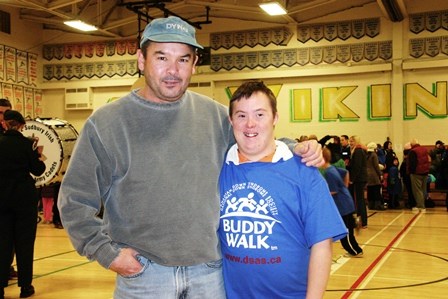 Roger Jackson and his son, Andrew, took part in the Buddy Walk on Nov. 4 at Lockerby Composite. The event raised $10,000 to support education about Down syndrome, as well as to help families in Greater Sudbury who have children with the condition. Darren MacDonald photo.

If there’s one thing Roger Jackson wished more people knew about Down syndrome, it’s that people with the condition are people first, with a range of abilities and interests, just like everybody else.

“We want to get the message out there to the community that we’re an identifiable group and we’re raising awareness about the abilities that our members have,” Jackson said, as he and his son, Andrew, were getting ready Nov. 4 to take part in the sixth annual Down Syndrome Association of Sudbury’s Buddy Walk. “We are a part of the community and they are contributing members of society.”

While making that clear, Jackson said he has noticed a big change during the last few years in the way society looks at conditions like Down syndrome.

“Things are getting so much better,” he said. “As a society, we’re developing and maturing. In the past, the focus was on the disability.  And we try to focus on the abilities.

“There are challenges, but we don’t treat them as disabilities. There are some cognitive issues and some health issues, but what we try to focus on is the fact that these are people who have a lot of abilities and a lot to contribute to society.”

Both men love to travel, and Jackson has taken Andrew, 23, to 11 countries and tried to expose him to as many life experiences as he can. He wants to teach him that life is about what you do, not what you can buy.

“It’s about life experiences,” he said. “So when we were in Turkey, Andrew received belly dancing lessons from an authentic belly dancing teacher. And he had a ride on a camel ... In England went through the Roman baths.

“These are the things we are doing. We don’t sit back and accumulate things. Our focus on vacation is experiencing the world.”

Andrew races over during the interview and is eager to take part.

“I love them,” Andrew says about his family and friends. “Yes, I do. I have many good friends who are walking today.

“That’s it. Thank you!” he says, and is off again to make the rounds in the gym at Lockerby Composite, where the Buddy Walk began.

A few hundred people took part in this year’s walk, the sixth the association had held in Sudbury. Kelly Strong, Vale Inc.’s vice-president of Ontario and UK operations and a volunteer with the group, talked about how when the walk started in 2006, they raised $2,000. That total has been rising steadily, Strong said.

Lisa Wright, president of the association in Sudbury, said the walk is all about showing Sudburians they’re part of the community.

“To promote inclusion and acceptance of people with Down syndrome,” said Wright, whose daughter, Holly, was born with the condition.

Wright said many people either don’t know anything about Down syndrome, or they have misconceptions.

“I hear often from people that anyone with Down syndrome is always happy, things like that,” she said. “But they have the same range of emotions as the rest of us.”

Other misconceptions are more negative, she said, such as the idea that they can’t function in society.

“Some people think people with Down syndrome can’t achieve very much. But if given the opportunity, they can be contributing members of society.”

Wright talked about what she went through as a parent when Holly was born, something most everyone with a child with Down syndrome goes through.

“It was a big surprise for us,” Wright said. “It was a shock, as it is for all parents in that situation. It wasn’t the baby we were expecting. I think any parent feels that and goes through that.

“But it’s turned out to be such a blessing. Having Holly in our lives has just been so fulfilling.”

Wright said money they raised will cover the costs of putting on the walk, with money left over to support the 50 or so families in Sudbury who are members of the association.

“Our profits go towards paying the cost of some parents to go to conferences about Down syndrome,” she said. “We also help families with direct services for their children. For example, some may need help with speech therapy. They may require an accessible bike. So the money definitely goes right back to help children with Down syndrome.”

As Andrew was his normal social butterfly self, his father talked about a recent trip the pair took to Ireland.

But there are no provincial karaoke competitions, and the national one was held in Vancouver. So last year, the pair decided to travel all the way to Killarney, Ireland, to witness the world championship karaoke battle, where 180 of the world’s best crooners gathered.

On the last night, the field was down to 20 finalists. After the performances there was an intermission while the judges were tabulating the result. One of the hosts of the show came over and asked them a question.

“She comes over and says, ‘Andrew, do you want to get up on stage?’ ” Jackson said.

Ever the entertainer, Andrew hopped up on the stage.

“The absolute highlight of my life comes when she asks him, ‘Andrew, what is your goal in life?’ ” Jackson said. “And Andrew says, ‘my goal in life is to come up on this stage and sing for you all.’

“There were roughly 500 people in the audience from around the world. And she says go for it. So he sings a little bit of Pink Floyd to all of these people who, remember, are at a professional level. And Andrew got perhaps the biggest cheer of anyone.”

In the video, which can be found on YouTube, a delighted Andrew immediately showed his hometown pride.

“I’m from Sudbury, Ontario, Canadaaaaaaaaa” he shouts, to uproarious applause. And after a short interview, he launches into a crowd-pleasing version of Pink Floyd’s Another Brick in the Wall.

“He’s incredibly social,” Jackson said. “Even last night, we were at the Trevi and he gets up and sings karaoke.”

See the video at http://www.youtube.com/watch?v=B7Id7Grukas