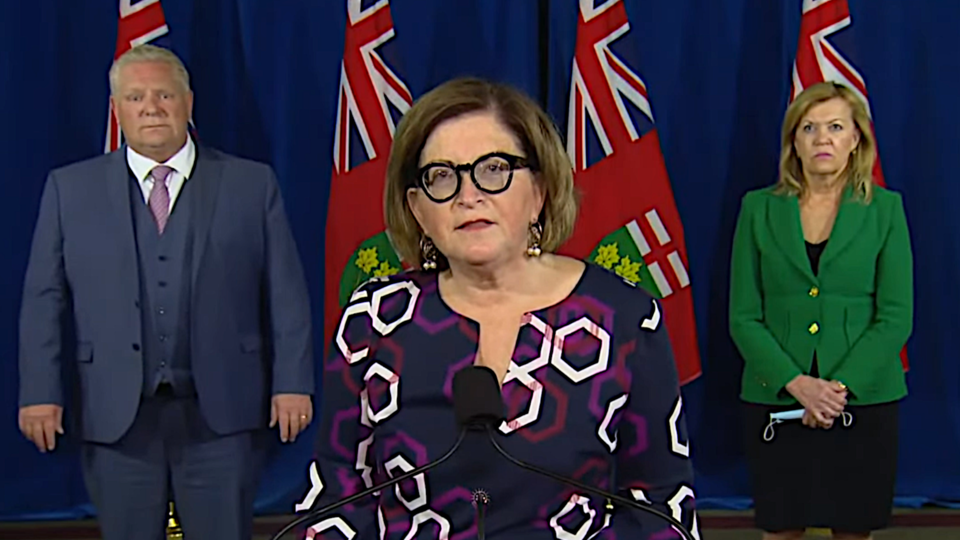 Dr. Barbara Yaffe, Ontario's associate chief medical officer of health, might have summed up what a lot of Ontarians are thinking these days.

"It's a tough time. Everybody is sick and tired of the whole thing. And we want to, you know, just get out and have a nice summer."

Yaffe was commenting Thursday afternoon at a briefing from Queen's Park on the latest effort by the province to control the spread of COVID-19 by implementing the stay-at-home order, providing stricter measures for shopping in big-box stores and by scaling up the vaccination effort that began at 12:01 this morning, April 8.

She said regional lockdowns had been put in place last week in different parts of the province in anticipation that the regional COVID-19 case counts would be diminished.

"We were hoping that would have an effect across the province," said Yaffe. "We were not seeing the anticipated effect and the numbers were getting dangerously high, particularly in terms of hospitalizations and ICUs (Intensive Care Units)."

She said what health officials began seeing was a spiked increase in the number of variants of concern (VOCs, new strains of the coronavirus), which are more transmissible and were resulting in more younger people being hospitalized.

"So we felt it was more important to have stronger public health measures put in place and that's what happened yesterday," said Yaffe during a teleconference with several Queen's Park reporters.

"So we have a stay-at-home order and we also have restrictions on work, on big-box stores and we really want everyone to understand that we are hoping you know that these measures won't last more than a month. We want everybody to comply. Do your best," Yaffe added.

That's when Yaffe added her comment about people being sick and tired, but she defended the government action.

Also commenting at the briefing was Dr. Dirk Huyer, the co-ordinator of the provincial COVID-19 response team. He commented on the concept that by the time the current stay-at-home order is completed in four weeks, it is expected that 40 per cent of Ontario adult residents will be vaccinated.

Huyer was asked if that would be enough to prevent future lockdowns or stay-at-home orders. He confirmed that based on the current forecast, there would indeed be 40 per cent of vaccinations done in four week's time in Ontario, provided the supply holds up.

"What we can't answer and we don't have the ability to say is whether that will prevent something as difficult as we are now experiencing with the stay-at-home orders," said Huyer.

"Having said that, 40 per cent of the population is still a significant number and still will clearly play a role in our management of this pandemic," Huyer added.

Yaffe added that it was indeed hard to predict, but said in order to get what is called herd immunity, the population would require up to 70 or 80 per cent of vaccination coverage.

Yaffe added that it was "heartening" to see the vaccine acceptance in Ontario long-term care homes where close to 100 per cent of residents and 70 per cent of staff were vaccinated.

"We have seen a dramatic reduction in cases and hospitalizations," said Yaffe.

Len Gillis is a Local Journalism Reporter at Sudbury.com. He covers health care in Northern Ontario.