Get your tickets: Virtual staging of play about Sudbury’s famous unsolved art theft goes this week 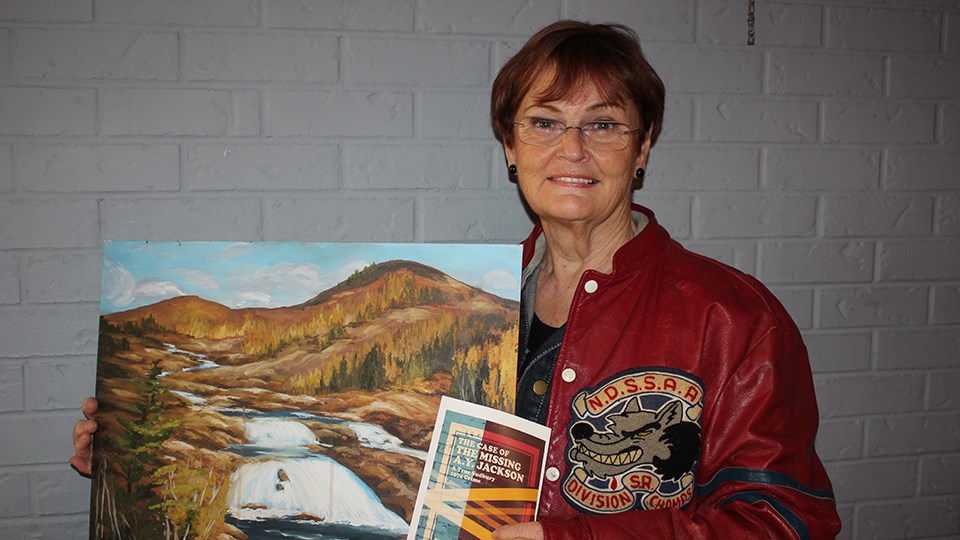 Playwright Judi Straughan with a recreation of one of the missing AY Jacksons, and wearing a vintage Sudbury High Jacket. (Heidi Ulrichsen/Sudbury.com)

Tickets are still available for a fundraising play about the Nickel City's famous unsolved art theft.

It’s a 46-year-old unsolved Sudbury mystery. In the middle of the night, on Aug. 9, 1974, two paintings by famed Group of Seven artist AY Jackson were stolen from the principal’s office at the school now known as Sudbury Secondary School.

The paintings have never been recovered.

First, a bit of background. Sudbury Secondary School actually used to be two schools, Sheridan Tech and Sudbury High School. Although located on the same property, there was a fierce rivalry between the schools.

The missing paintings were both purchased in the 1950s — one called Spring on the Onaping River and the other called A Windy Day -- Lake Superior.

Spring on the Onaping River was purchased by Sheridan Tech students after Jackson was brought in by art teacher Jack Smith to paint with them, and A Windy Day -- Lake Superior by Sudbury High students in memory of Gerard Castonguay, a beloved teacher murdered over lunch hour in 1957.

On the night the paintings were stolen, renovations were underway in preparation for the two schools to be merged as Sudbury Secondary School.

Sudbury Sec’s new principal, Len Yauk, had put both paintings in his office during the renovations so they could later be displayed together.

The thief or thieves were able to take advantage of the fact that the cleaners were on the opposite end of the huge school that night, and the alarm system hadn’t yet been connected up for the whole building.

Some have speculated that it may have been an inside job, as the culprit would have had to know the paintings were being stored in the principal’s office.

The nearly half-century-old unsolved crime has become fodder for a new play written by Judi Straughan, a drama teacher at Sudbury Secondary School from 1985 to 1998.

The play, a fundraiser for the community radio station CKLU, is called “The Case of the Missing AY Jackson.”

“The Case of the Missing AY Jackson” was originally supposed to be staged this past April, but like everything that happened around that time, it was postponed due to the COVID-19 pandemic.

Given the pandemic restrictions still in place, Straughan had to get creative. The play was staged at Sudbury Theatre Centre on Nov. 8 in front of a small, socially-distanced audience.

It was also filmed, and on Dec. 4-7, people can watch the play from the convenience of their own homes, meaning the play’s reach will be far wider than Greater Sudbury. Get your tickets on CKLU's website.

Straughan has teamed up with Crime Stoppers, who are offering a reward of up to $2,000 for tips that lead to a successful resolution of the case.

“Honestly, after 46 years, maybe someone will come forth and say ‘You know what, I do know something that happened,’ and they can phone anonymously to Crime Stoppers,” she said.

“Wouldn’t that be fantastic to get a tip? Our hook for the story really is somebody knows something. This could cause this painting or these two paintings to be found.”

The stolen paintings are still an open case for police authorities including Greater Sudbury Police and the RCMP.

Yauk, the first principal of Sudbury Secondary, travelled from his home in Parry Sound to Sudbury to view the play, and told Straughan that as recently as three years ago, the RCMP phoned him to go over details of the theft.

While a compelling mystery, the play also features nostalgia for those who attended Sudbury High and Sheridan Tech, including both of the school’s songs.

Straughan notes that when Sudbury High and Sheridan Tech were merged, it was something like merging the Democrats and Republicans in the U.S. — the rivalry was fiery.

She said she read a social media post from an audience member and former Sheridan Tech student, who said she sang her old school’s song quietly from the audience, “but I just couldn’t sing the Sudbury High one, even though I knew all the words.”

If you’d like to watch the online version of The Case of the Missing AY Jackson, you can do so Dec. 4-7 through CKLU.ca. Tickets, which cost $16, are on sale now, also through CKLU.ca.