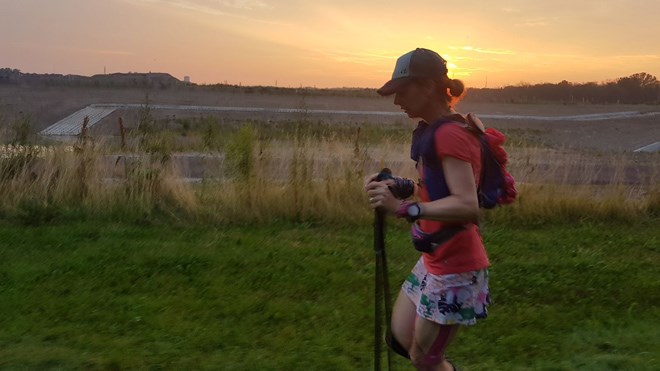 Former Sudburian Chantal Warriner ran 906 kilometres in 12 days, 15 hours and 14 minutes to set a record for women on the Bruce Trail. (Supplied)

And it comes as no surprise. After all, she recently ran more than 900 kilometres of the Bruce Trail in under 13 days. It was a grueling experience, and she was often running in the wee hours of the morning, but it was well worth it, she said, because she set a new fastest-known-time for women on the Bruce Trail at 12 days, 15 hours and 14 minutes.

“I can hardly believe it myself,” Warriner said in a phone interview.

Prior to this feat, the longest distance Warriner had ever run was 100 miles (roughly 160 kilometres).

“A few years ago, I was thinking about different ways to challenge myself, and looking at ways other runners were challenging themselves all over the world,” said Warriner, who has been doing ultra running for about four years now. “I heard about women and men completing the Bruce Trail end to end, and that's what inspired me to do this.”

Last year, she ran the Bruce Trail as part of a women's relay team, and set the record at just over four days. Her team had 18 women, each taking turns to make sure one person was running 24 hours a day.

It gave her a clear understanding of what to expect this time around.

“My initial goal was for 11 days, but with the weather at the onset of the run, which made for some tough terrain, we had to adjust that goal fairly early on,” she said.

“We took it one day at a time, and made sure that I was healthy and eating and drinking. After the whole thing was said and done, we were only one day behind schedule, and I'm very happy with that.”

At no point in her run did the thought of quitting cross her mind, even with all of the challenges that stood in her way.

“I stayed strong, and I had so much support from friends and family, and made some new friends along the way,” she said. “I kept thinking of it as one station to the next, and eventually I made it to the end.”

The most difficult challenge, she said, was the heat and the resulting heat rash. Sore feet after long days of running was also a sticking point.

Post race, Warriner said she's spending a lot of “cuddle” time with her two daughters and catching up on some much-needed and well-deserved sleep. Then, she'll start preparing for another 100-mile race in September in Colorado.

“I'm curious as to how I will think of it after having done such a long run last week like the Bruce Trail,” she said.

For anyone thinking about running extreme distances like the Bruce Trail, Warriner said it's important to goals and to believe in your abilities.

“We are capable of doing such wonderful things when you have a good support system, and if you set up your foundation properly, you can succeed at anything,” she said. “I was very fortunate that I had such a wonderful crew and such great community support. I was inspired by them as much as they were inspired by me, and I think that made a world of a difference.

“I want to thank my crew members Caitlyn, Alan and Craig who were with me the entire time. I really do feel like we did it, not just me. We worked together, came up with a plan and we were all successful in it. It was so special, and I will always hold this experience close to my heart.”