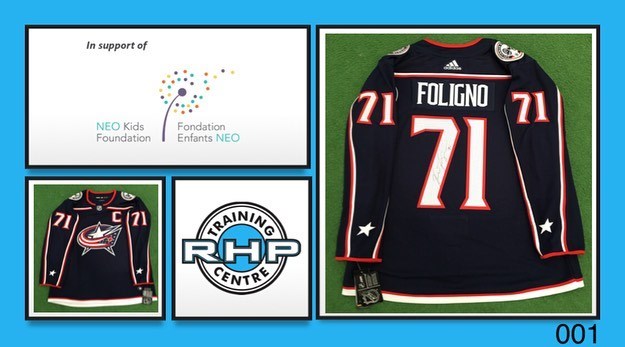 From now until July 16, hockey fans can bid on signed hockey jerseys in a silent auction, with all of the proceeds going to NEO Kids. (RHP Training Centre/Facebook)

Numerous Sudbury summertime activities have been impacted by COVID-19, not the least of which was the NHL vs Docs for NEO Kids hockey game.

This year's event had to be moved into an online format where hockey fans could catch NHLers taking on local personalities in a puck juggling competition. The virtual event was viewed by more than 200 people and brought in $78,900.

One of the city's premier hockey training facilities, RHP Training Centre has had a long-standing relationship with the Foligno brothers, Nick and Marcus, and the pair have been joined by some of their hockey pals to help RHP raise more money for NEO Kids.

From now until July 16, hockey fans can bid on signed hockey jerseys in a silent auction, with all of the proceeds going to NEO Kids.

"We usually help Nick and Marcus out with the golf tournaments they host and with NHL vs Docs which wasn't able to really happen this year, so we thought this was a great way to give this a boost for a few extra dollars," said Mat Paradis, manager at RHP.

"They (Nick and Marcus) typically play three-on-three here during the summer so they have very strong ties with to the community."

RHP owner Marc Savard has had a working relationship with the brothers for nearly a decade, since the training centre opened. While disappointed that the NHL vs Docs game couldn't happen this year, Savard had nothing but praise for the dedication to NEO Kids that both Nick and Marcus have.

"Obviously this year they weren't able to do their big fundraiser with NEO Kids, but with having Leon Draisaitl up here and a few others we figured why not have a jersey auction and try to raise some money on that front," said Savard.

"Nick and Marcus are very community-oriented, they're such great human beings and with Nick's daughters having had health issues he really takes that to heart. They're both family-oriented and I'm sure you know they have the Janice Foligno Foundation and Mike (Foligno) is still in the community as well. They're just very well-rounded and they're always here for the community; any favours that we ask of them they're always there, you really can't ask for better individuals."

Essential Worker of the Day: RN Shawn Moyle
Aug 7, 2020 12:00 PM
Comments
We welcome your feedback and encourage you to share your thoughts. We ask that you be respectful of others and their points of view, refrain from personal attacks and stay on topic. To learn about our commenting policies and how we moderate, please read our Community Guidelines.