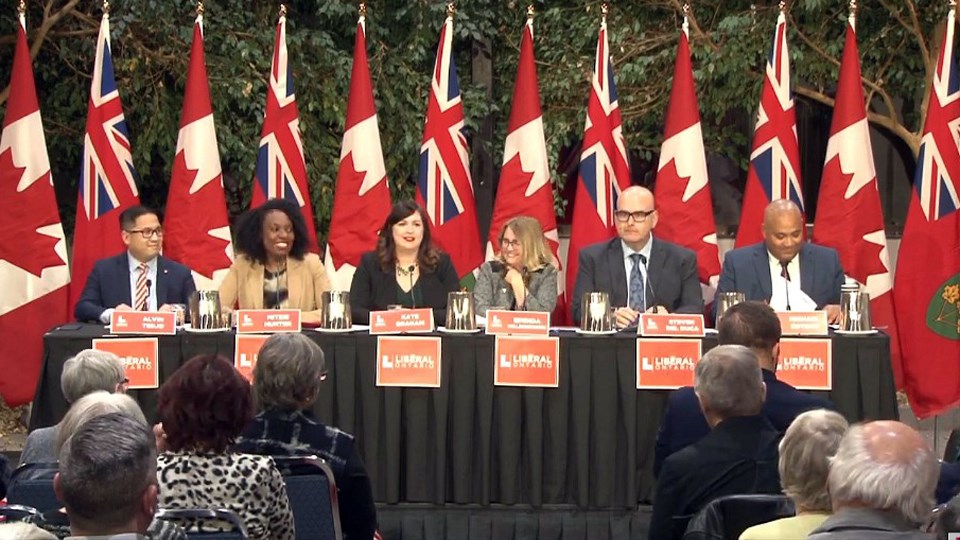 Learning the lessons from the disastrous 2018 election is key to winning in 2018, Ontario Liberal leadership candidates said in Sudbury on Thursday, who saved their sharpest attacks for Tory Premier Doug Ford.

Except for Coteau, the candidates opened by speaking a few words in French – some heavily accented French, outside of Hollingsworth, an Ottawa-area lawyer who has a family connection of sorts to Sudbury.

Her nephew, Owen Hollingsworth, was a 13th round draft pick of the Sudbury Wolves in 2019.

"Our family — including his grandparents, who are in the front row — hope to spend a lot of time here next hockey season," she said.

The candidates attacked Ford for not taking climate change seriously, and Hollingsworth said Sudbury is proof that strong environmental policy can transform communities. And with demand for electric cars setting expected to soar, the city is set up to be significant players in green technology.

"You are sitting in a battery-maker's dream — with nickel, cobalt, copper, lithium, all conflict free, all child-labour free,” she said. “The world needs what Northern Ontario has."

But the North doesn't have an ally at Queen's Park any more, she said, working on issues such as the severe shortage of skilled labour needed to take advantage of those opportunities.

Del Duca, the front-runner in the race, praised Thibeault for his work in the Liberal cabinet, calling him “an inspirational advocate for Northern Ontario and for the energy file he carried."

He then turned to Ford, and the current problems negotiating with teachers. The “assault on education” is part of the premier's agenda, along with cutting environmental protections and other moves Del Duca said are undoing progress the province has made.

"Frankly, they are only in it for themselves and their friends,” he said. “That's legacy we've seen in less than two years of Doug Ford ... It's up to us as Liberals, to make sure that doesn't happen."

Tedjo touted his plan to merge the public and Catholic school boards, something he said is supported by 70 per cent of voters, and would save more than enough money to solve the current contract impasse.

"We could pool all those resources together right now and save almost $1.6 billion and invest it in the classroom," he said.

Liberals have to regain the trust of voters, first, he said, and have to be honest about the fact "we didn't always listen" when they were in government.

"We need to rebuild that trust by listening," Tedjo said. "We need proposals that get people excited to vote for us, not just against someone else — the Progressive Conservatives."

Hunter was more blunt in her assessment of the Ford government: "Our province has a bully at the helm right now."

She said problems such as opioid addiction are getting worse, while Ford is focused on political concerns.

"Here in Sudbury, every five days someone dies because of the opioid crisis," Hunter said. "This is an issue we have to address."

In response to a question about the gender wage gap in the province, Hunter said she confronted Ford when he refused to enact legislation addressing the issue. It was supposed to become law in January 2019.

"He just removed the date,” Hunter said. “He didn't want to confront the conversation with all the stakeholders. By not enacting it into law, it does not take effect.

"I believe he is one of the most anti-women that I have ever seen."

On the same topic, Graham said one of her first jobs was a cashier, where she found out a male colleague hired at the same time with the same experience was getting 50 cents an hour more than her. So she asked her boss what was going on.

"The response was, if you talk to people about how much you make, we can fire you," Graham said. "This is one of the things (former Premier) Kathleen Wynne was looking to fix — making sure that conversation can never happen again.

Part of the problem, she said, is women are severely underrepresented in politics.

"I'm worried when we have a country where every premier of our provinces is an older white man, many of whom seem to be in it for the fight, I'm worried about what that means for our country," she said. "I do not think we can win in 2022 if we look the same as we did in 2018."

Del Duca said it was harder for people like him to understand when he has never "walked a mile in the shoes of someone who has to confront this challenge."

But he said when it comes to gender pay equity, an "interventionist" approach is needed by government — laissez-faire approaches won't work.

"As Liberals who are always focused on progress, it falls us on to not leave it to organic solutions," Del Duca said.

Hollingsworth said Ontario should not buy from or do business with companies that don't have a gender gap equality policy.

"(And) we need to see proof they are going to abide by gender pay parity."

Coteau said the party's 2018 loss was an opportunity to reinvent themselves.

"It was the worst showing of Liberals in the history of our party," he said. "The one thing we didn't lose as Liberals was our values."

He wants to redefine what it means to be a Liberal, to talk with supporters to understand what their core values are and from there, develop policies to win the next 2022 election.

Del Duca said once a new leader is elected at the March 8 convention, the party needs to start the process of developing policies for the next election immediately.

"We need to hit the ground running."

Hunter said she has promised to "knock on a million doors" across Ontario to consult with people on policies for the next vote, which she said will be vital in determining the province's future.

"We have to go toe-to-toe with Doug Ford and stop the destruction of programs and services that people care about," she said. "We are facing a bully right now, and we need someone who can fight that bully."

The next debate among the candidates takes place Feb. 1 in Markham. A full recording of the Sudbury debate can be found here.