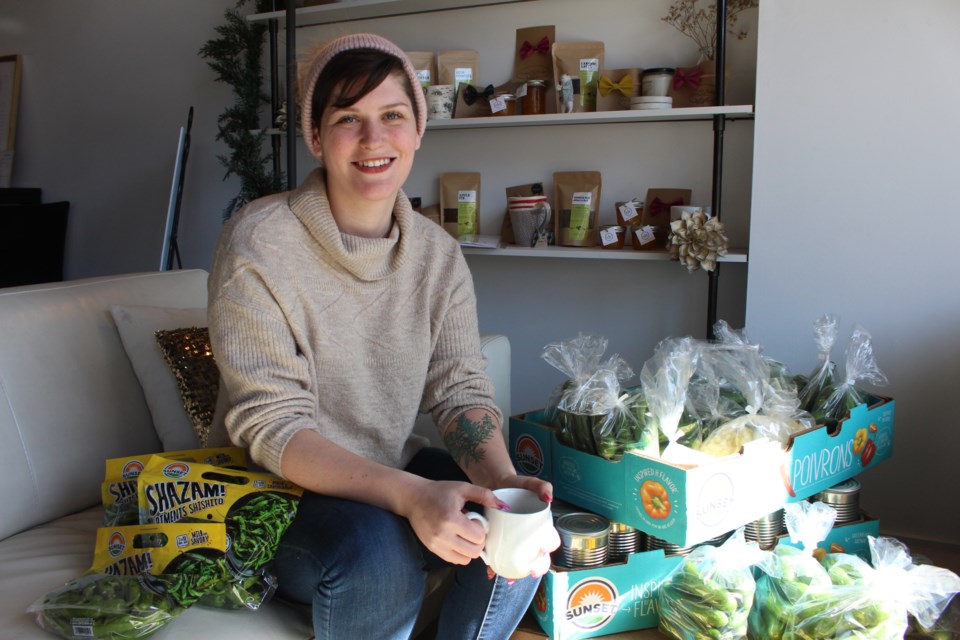 Guilty Pleasures Bakeshop and Bar storefront has been closed for just over one week, but not before owner Justine Martin could use the space to help those facing food insecurity amidst COVID-19.

Guilty Pleasures Bakeshop and Bar storefront has been closed for just over one week, but not before owner Justine Martin could use the space to help those facing food insecurity amidst COVID-19.

On the weekend of March 14, Martin with the help of boyfriend Rob Burlington and friends filled her downtown location with around 1,500-pounds of food to giveaway to anyone and everyone looking for a few extra supplies. Which included chopped apples, baby cucumbers, fat-free creamer, canned corn and decaf coffee.

Greeted with a lineup established an hour before opening, Martin said the weekend was a heartwarming success. Everyone took no more than their share and were incredibly respectful she said, evidently the help was needed.

Many customers surprised her in their generosity that day by purchasing suspended meals for others, sharing stories of who they were collecting for, or by agreeing to drop-off items upon Martin’s request.

One woman in particular she said, waited in line with everyone else so she could purchase a cupcake for each child in attendance, taking no supplies for herself.

Any leftovers were to be donated to the Food Rescue program Guilty Pleasures is a member of, that helps food businesses donate unsold product to non-profit organizations. Saturday's attendance, however, proved that that step wouldn't be necessary.

The sudden shortage of food in the community was brought to Martin’s attention earlier that week she said, and with more time on her hands and space at her disposal, it was the perfect opportunity to lend a hand. But as she made clear, it would not have been possible without special help from the “Island.”

All of the sales from his store go to paying his employees and putting fuel in the trucks he sends to Toronto to collect more supplies, said Martin. The majority of which, he gives away for free weekly, if not twice a week, no questions asked.

“Every week there is free food available on the island courtesy of this one man.”

Alerted to the fact that Barney would be bringing in thousands of more pounds of food in response to COVID-19, Martin decided Friday morning to bring some of the plenty a little closer to home.

She announced the initiative on Facebook later that day and with such a positive response, decided to clean out her freezer and send boyfriend Rob back for a second round.

In addition to the supplies collected from Barney’s, Martin added her cake crumbs, generally reserved for cake pops, to the list of giveaways. Rob and she also began work on several items, not part of the store’s regular menu, to fill the gaps of on grocery store shelves. Producing, for example, fresh-baked baguettes until further notice.

With how successful the initiative was, Martin said she would be happy to host something similar in the future but when and if that would occur, would be determined on a case by case basis. The process requires a lot of help she said, not to mention having to borrow something bigger than her Honda Civic.

Challenge, however, is not something Martin tends to shy away from.

Less than a month after being named Cake Designer of the Year by the Ontario Wedding Awards, Guilty Pleasures became the first Northern Ontario business to be honoured at the 2020 International Wedding Awards. But this does not make her business immune to the COVID-19 outbreak.

The impact of the novel coronavirus on small businesses in Greater Sudbury has been “significant and swift,” said Martin. In three days, she went from booking events for the end of March to having everything cancelled until the end of May.

Small businesses, especially those open for a short amount of time, don’t have the savings to take the big hits that corporations can absorb. Many downtown businesses have instituted paid sick leave or new health policies at great cost to them, but as her business’ sole employee, her health and that of her customers remain her primary focus.

“My boyfriend thinks I’m crazy because I’m running around with disinfectant wipes, wiping every single thing every five minutes,” she laughed.

In addition to building upon her already regimented cleaning schedule, Martin said she took extra-care on give-away day. All food was bagged by Rob and herself after thoroughly cleaning their hands and the surrounding area.

Food was then displayed in the most accessible format possible to limit physical contact and the attendees were staggered in their entry.

During this time, Martin asks neighbours to be cognizant of their favourite small business and support them as they can should they have the means to do so.

Find more information on Guilty Pleasures Bakeshop and Bar and how to place your order for delivery here.