One of the first acts of the newly incorporated Town of Sudbury in 1893 was to pass a bylaw banning cows and other livestock from roaming in the street.
May 3, 2012 9:26 PM By: Darren MacDonald 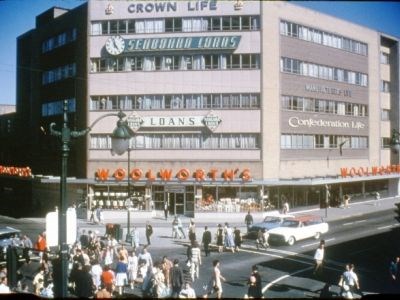 The former Woolworth's building is seen in this photo, circa 1957. It is one of thousands of images and other artifacts housed in the City of Greater Sudbury Archives in Falconbridge. Photo by Darren MacDonald.
One of the first acts of the newly incorporated Town of Sudbury in 1893 was to pass a bylaw banning cows and other livestock from roaming in the street.

This nugget of history is found in the handwritten minutes of the inaugural town meeting, and is a tiny sample of the documents, photos, home movies and other artifacts that make up the City of Greater Sudbury Archives.

The archive, located in the Edison Building on Lindsley Street in Falconbridge, will eventually be open to the public, but for now, residents can tour the facility by making an appointment. Housed in the former headquarters for Falconbridge Ltd., Xstrata donated the facility to Greater Sudbury, and also helped pay the cost of basic renovations.

“This was the main office for Falconbridge in Sudbury,” Slade said, adding it was built in the 1970s. “This used to be my office.

“This building is 35,000 square feet, it had all the latest equipment in it, and it was going to be torn down.”

It took just two months in 2006 to secure an agreement from Xstrata to donate the building.

Matichuk said the importance of preserving the city's history can't be overstated.

“I'm a fourth-generation Sudburian, but a lot of newcomers to the city don't know the history, of how hard people worked to get us to where we are today,” she said. “And I think we need to celebrate that. The past can help shape your future.”

Ward 7 Coun. Dave Kilgour said there is much work left to do in developing Sudbury's archival history collection.

“Over the next four years, work will continue to make further modifications to the archives building. It will deliver reference services to the public, while continuing to expand its collection of municipal, public and private records.”

Shanna Fraser, who led residents and the media on a tour of the archive, said much of the archive in their possession still needs to be processed and isn't open to the public. But once that process is complete, residents can come and browse any aspect of the archive they wish.

Dieter Buse, chair of the Sudbury District Archives Interest Group, said the archive is essential to the health of the city.

“I have the opinion that a city without archives is like a city with Alzheimers. It's in danger of losing its memory and identity.”

His volunteer group led the planning and development of the archive, and came up with the strategic plan to make it a reality. He said they already know what they see as the next stage in the process.

“Now we have a building, now we have some staff. Madame mayor, councillors, we need more staff. We need a user-friendly collection of archives.”