When does the city become liable for pothole damage?

The clock doesn't start until the pothole is reported to 311

As you may have heard, Greater Sudbury has a pothole problem, an annual event that seems to be particularly serious this year.

With so many drivers reporting damage to their vehicles, you may wonder exactly what guidelines Greater Sudbury – or any Ontario city – has to follow to avoid being held liable in a lawsuit when it comes to this most unwelcome spring tradition.

The municipality's responsibility depends on a few things: the size of the pothole, how many cars usually travel the road each day, and when the city was made aware of the hole.

This is why it is important to report potholes by phoning 311 or using Sudbury.com's Pothole Reporter app at Pothole.Sudbury.com. Once the municipality is made aware of the pothole, the clock starts ticking.

If the pothole exceeds the area and depth found in the regulations set by the Municipal Act, then the city must repair the pothole within the limit. See infographic below. 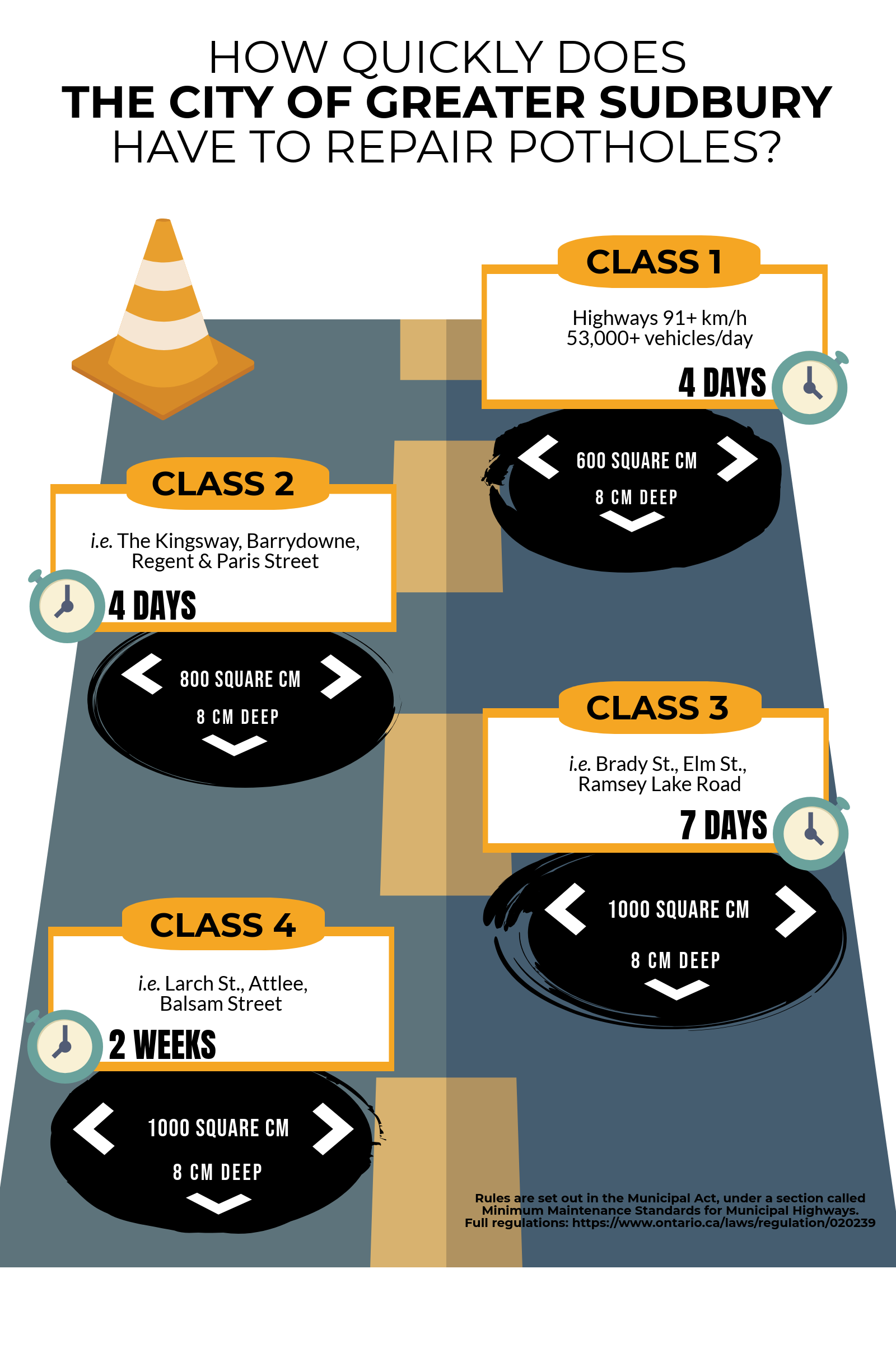 Most of the major arterial and connector roads in Greater Sudbury (Barrydowne, The Kingsway, Regent, Paris Streets) are considered Class 2 roads. If you report a pothole on a Class 2 road that is at least 800 sq cm in area and eight cm deep, the city is required to repair it within four days after becoming aware of the pothole.

On less-travelled roads, such as Ramsey Lake Road, Howey Drive, Elm and Brady Streets, if a pothole exceeds 1,000 sq cm in area and eight cm deep, the city is required to repair it within seven days after becoming aware of it.

Roads such as Larch Street, Attlee and Balsam Street in Copper Cliff are considered Class 4 roads. Once a pothole is reported on a Class 4 road, and it exceeds 1,000 sq cm and 8 cm deep, the city has two weeks to repair it.

There is no maintenance standard in place for Class 6 roads. There is a similar standard for dirt roads, that cover potholes that are 1,500 square cm and larger, and the city has anywhere from a week to two months, depending on the class of the road.

Damaged road shoulders that are eight cm deep and extend for 20 metres or more have to be repaired according to the same standard as potholes.

If the city does not meet the standards, and your vehicle is damaged as a result, then you will most likely be awarded for the claim you file. But if the pothole you hit hasn't been reported yet, or if the city does repair the pothole within the required time, even if you hit the pothole before the repair was done, then you will not likely be awarded your claim because the city has complied with its legislated obligations. For information about how to submit a claim to the City of Greater Sudbury due to damage to your vehicle from a pothole, click here.

The rules are set out in the Municipal Act, under a section called Minimum Maintenance Standards for Municipal Highways. They're updated every five years, with the last revision coming in May 2018.  Read the full regulations here.