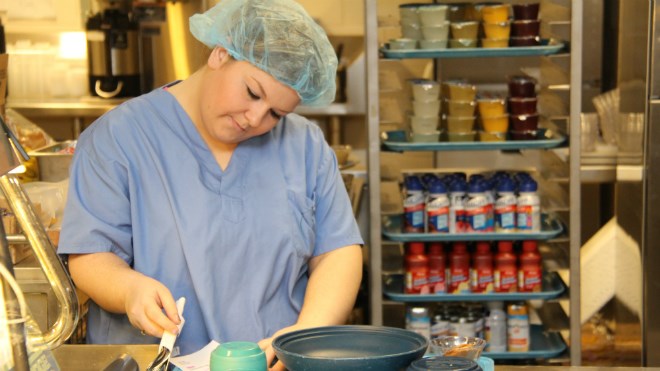 Health Sciences North has 50 employees who feed more than 400 patients every day. The hospital hopes to add more Ontario products to its monthly $100,000 grocery list. Photo by Jonathan Migneault.
“You're seeing Tim Hortons pop up all over these hospitals,” he said. “It's a shame.”

Health Sciences North does have two Tim Hortons restaurants, but the hospital has also partnered with the Greenbelt Fund's Local Food Challenge to more than double the amount of food it purchases from Ontario growers and producers for patient meals.

The Greenbelt Fund is a non-profit organization that works to enhance the sustainability of agriculture in Ontario.

Around 11 per cent of the hospital's in-patient food comes from Ontario, and with the new program the goal will be to increase that proportion by 15 per cent.

Health Sciences North spends about $100,000 each month to purchase food for around 400 patients. The hospital's kitchen, for the in-patient food program, has around 50 employees, and is not too different from an operation at a large hotel.

The hospital's retail food service sources around 30 to 40 per cent of its food from Ontario.

Alex Jackson, co-ordinator of the Campaign for Better Hospital Food in England, joined Rodrigues on his tour of Ontario communities.

Jackson said he worries Ontario hospitals could follow the same path as those in his home country, where the quality of the food has declined steadily.

“Hospital food in England is a cause of national disgrace,” Jackson said.

“Hospitals often use cost as a reason for serving cheap and inedible meals.”

He added that while Northern Ontario does not have a year-round growing season, hospitals can make efforts to purchase fair trade and sustainable food from other jurisdictions when local produce isn't available.

“Just because the growing season doesn't last year-round, doesn't mean we therefore have to revert to eating processed meals,” he said.