Thanks to the Pennies for Pediatrics Campaign, which started in May 2012, Health Sciences North has officially opened Sudbury's first Snoezelen pool.
Jul 15, 2014 6:22 PM By: Jonathan Migneault 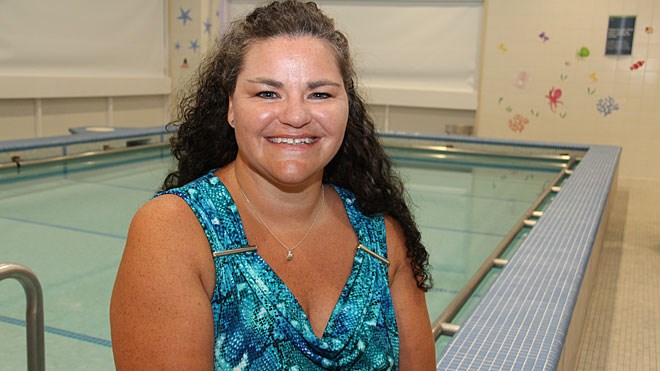 Paula Watson was an early advocate for Health Sciences North's new Snoezelen pool, seen behind her. The pool uses auditory, sensory and visual stimulation to treat people with developmental disabilities, such as her two sons who were born with cerebral palsy. Photo by Jonathan Migneault.
Thanks to the Pennies for Pediatrics Campaign, which started in May 2012, Health Sciences North has officially opened Sudbury's first Snoezelen pool.

The pool uses auditory, sensory and visual stimulation to treat people with developmental disabilities such as autism and cerebral palsy.

Paula Watson, whose twin boys, Scott and Ian Watson, were born with cerebral palsy, was an early advocate for the Snoezelen pool.

Snoezelen pools were first developed in the Netherlands in the 1970s, but have evolved since then.

Health Sciences North's pool includes soothing music, images of fish created with light and a pool that can create bubbles and other forms of sensory stimulation.
Watson first heard about Snoezelen pools after she saw one during a visit to Waterloo.

“It was just an amazing pool,” she said.

She approached Sally Spence, who was clinical manager of the hospital's Children Treatment Centre at the time, about building a similar pool in Sudbury.

“She was just as enthusiastic as I was, and that's how the seed started,” Watson said.

In May 2012, the hospital's volunteer services unit launched the Pennies for Pediatrics campaign, which became the city's biggest penny drive.

The original goal was to raise $100,000 to add the Snoezelen equipment to the hospital's existing therapeutic pool, but the campaign reached $150,000.

The pool had its grand opening July 15, but has been in operation for several months.

Watson said her sons have already benefited from the Snoezelen therapy.

“Because they're quadriplegic, and they have trouble moving their limbs, and they're very spastic,” she said. The water relaxes them. They're not getting muscle spasms and the light stimulates them.”

The therapy helps calm her boys, Watson said, and allows them to vocalize more than they would normally.

Joanne Tramontini, the current clinical manager for Health Sciences North's Children's Treatment Centre, said hundreds of children, and some adults, have benefited from the Snoezelen pool so far.

“It is pretty busy most of the time,” she said.

The pool includes a plaque in memory of Spence, one of its earliest advocates, who died of cancer last March.