Report recommends one councillor be asked to resign, mayor and another councillor sanctioned
0
Sep 16, 2019 12:00 PM By: Sudbury.com Staff 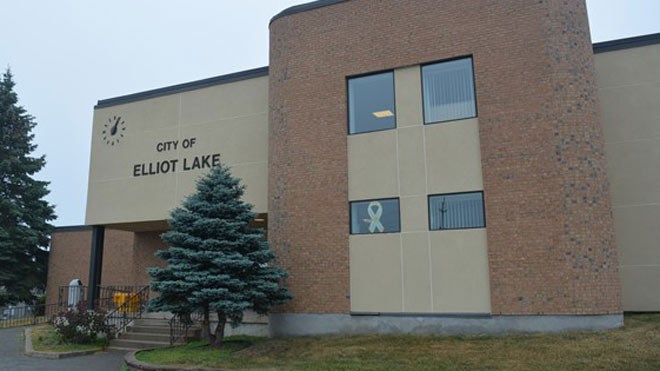 Members of Elliot Lake city council are under fire, after the area's integrity commissioner issued the results of an investigation that stemmed from the city's decision to buy the land where the Argo Centre Mall once stood. (File)

Members of Elliot Lake city council are under fire, after the area's integrity commissioner issued the results of an investigation this week that left few of them unscathed.

The community hired a Sault Ste. Marie based firm, E4M Solutions, in February as a cheaper option to Robert Swayze, who acts in the same role in Greater Sudbury.

But the savings turned out to be fleeting, as E4M was flooded with complaints since they were hired – the vast majority of which were made by local politicians about each other.

At issue is the land where the Algo Centre Mall once stood. The structure collapsed in 2012, killing two people, and has since been levelled.
Located at 151 Ontario Ave., councillors voted 4-3 in May to buy the property to use to build a new, $40 million community hub, which would include a new hockey arena, a pool, a gym and other amenities.

That decision prompted the flood of complaints to the integrity commissioner – 23 from seven complainants. According to the E4M report — which was tabled Sept. 12 at a special council meeting — councillors on either side of the issue complained about each other.

"It is clear to us that council is fractured,” the report said. "It seems very unlikely that any of these complaints would have been made had it not been for the purchase issue and its surrounding events.

"Sadly now Elliot Lake taxpayers have to bear the cost of the largest number of complaints and investigations that we have seen from any of the 54 municipalities that we act for as Integrity Commissioner since March 1, 2019.”

Among the findings in the 31-page report that was that two city councillors should face court proceedings under the Municipal Conflict of Interest Act for alleged conflict of interest violations: Chris Patrie and Ed Pearce.

Pearce, a board member of ELNOS, a local business development organization, participated in council discussions where ELNOS had a pecuniary interest instead of declaring a conflict.

But it was Patrie who subject to the most intense criticism in the report because he pushed for the city to buy another site for the community hub – one in which he had an indirect pecuniary interest.

“In addition to the suspension, we also recommend that council resolve to ask for Councillor Patrie’s resignation from council and that council remove him from any and all municipal committees, boards or commissions,” the report said.

Mayor Dan Marchisella had four complaints against him confirmed, one for doing the job of staff, another for disclosing confidential information about the purchase of the former mall property, one for social media posts and a fourth for improperly attending a meeting.

"We recommend that Mayor Marchisella receive both a reprimand and that his remuneration as a member of council be suspended for the period of one month,” the report says.

“We further recommend that within 60 days, all of council receive training with respect to requirements for confidentiality of in camera information and other private information that council will obtain in the course of their duties."

A former councillor, Tammy Van Roon, was also found to have been working with Patrie to undermine the purchase of the former mall property.

The investigations have costs about $56,000 so far, while councillors will vote whether to approve the recommended sanctions at their Sept. 23 meeting.

Here's the original story from Elliot Lake Today, as well as a reaction piece from the mayor.