More than 20 years after retailer Jan Browning moved to the Four Corners from downtown, she has purchased the Paquette’s Men’s Wear building on Durham St. and is planning to open a speciality shop.
0
Aug 1, 2006 11:21 PM By: Sudbury.com Staff 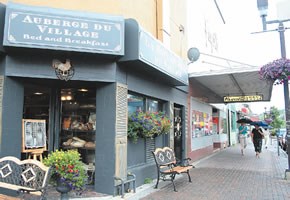 Jan Browning and Shirley Vincent are planning on opening a shop that should be popular with customers who enjoy lovely things.

More than 20 years after retailer Jan Browning moved to the Four Corners from downtown, she has purchased the Paquette’s Men’s Wear building on Durham St. and is planning to open a speciality shop.

It will feature women’s fashions, shoes, and body and bath products.

“I care about Sudbury,” says Jan Browning, who is happy to part of the revitalization of downtown.

Like many business owners and citizens, she is concerned about the “paving over” of downtown.

Many buildings have been torn down and replaced with parking lots, she said.

She mentions the loss of the Capitol Theatre on Cedar St., as a recent example of buildings with great potential which are gone forever.

Browning said she hopes the new store will be open by the beginning of October.

Members of the Downtown Village Development Corporation issued a statement last week about the new owner of the Paquette building which has housed a men’s clothing store for more than a century.

In that release, Browning and her partner Shirley Vincent said, “The Downtown Village Development Corporation that worked with us were most helpful and were the driving force behind our decision to purchase commercial property on Durham St. We have faith in their vision and ability to accomplish what we hope will be a downtown that reflects the beauty and vibrancy that all is citizens and businesses are awaiting.”

A hip new bar, SRO (Standing Room Only) is due to open in late summer in the former Habanas location at street level in the old Eaton’s building. March Entertainment, the creators of the television animated program Chilly Beach, have located its offices on the upper floors.

Robert Wygant, owner of La Boulangerie du Village, the bakery and l’Auberge du Village, a bed and breakfast, on the corner of Durham and Larch St., said, “I am very pleased with the initiatives and programs being undertaken by Downtown Village Development Corporation.

“These initiatives will develop a downtown neighborhood environment which will attract residents and help ensure the viability of projects... These initiatives weighed heavily in my recent decision to invest in the downtown core.”

In addition, several businesses and citizens have expressed interest in sponsoring street furniture as the final designs are completed over the next few months.

Incorporated in 2003, Downtown Village Development Corporation is a private sector not-for-profit organization dedicated to improving the market climate of downtown Sudbury through the enhancement of its identity and the strengthening of its economic vitality.

Susan Thompson is the director of the Downtown Village Development Corporation ( www.downtownvillage.ca)

BarCamp not about booze

As the next-generation of technology begins to rear its head, one man is making sure Sudbury is not left out of the loop with BarCamp.

BarCamp is an ad-hoc international gathering designed for people to come together and share ideas and information in an open setting.

The event features discussions and workshops put on by attendees.

BarCamp began in southern California by Chris Messina. There are now BarCamps the world over where people congregate to share ideas and information on the latest technology and how it can help businesses and consumers.

Scott Brooks, organizer behind BarCamp Sudbury, said, “I was at BarCamp Tdot and discussions were underway about how to signify BarCamp’s one-year anniversary.”

The idea was to create a BarCamp Earth where camps from all over the world, including one in Sudbury, could interact simultaneously.

“We’re going to have it on-line so that someone going to BarCamp Vancouver could tune into a session in Sudbury or a person in Sudbury could see what’s going on in Portland,” said Brooks.

“We’re going to manage it and have a live-cast from the e-dome...we’re sort of hosting the world at Cambrian.

“There’s a lot of people developing software in Sudbury and I think there’s something that can be learned for somebody else because some of the problems we may be having in Sudbury, someone’s already solved in Toronto.

For more information, contact Brooks at scotty.brooks@gmail.com or visit www.barcamp.org.

She was recognized by her peers with the CBA Bookkeeping Excellence 2006 Award and a scholarship.

The CBA Bookkeeping Excellence 2006 Award is a Canada-wide distinction voted on by the entire association membership. It is presented each year to the CBA member who has demonstrated exemplary bookkeeping knowledgeable and best practices.

The scholarship will allow Curwin to earn the Distinguished Financial Adviser designation. It is awarded each year by the Knowledge Bureau, Canada’s leading educator in the tax and financial services industries.

Nickel District Pool closed for the day
Jan 19, 2020 12:46 PM
Comments
We welcome your feedback and encourage you to share your thoughts on this story. We ask that you be respectful of others and their points of view, refrain from personal attacks and stay on topic. To learn about our commenting policies and how we moderate, please read our Community Guidelines.