Tanner Currie has failed on several occasions to pursue criminal, civil suits against Sudbury police
0
Sep 6, 2019 11:53 AM By: Darren MacDonald 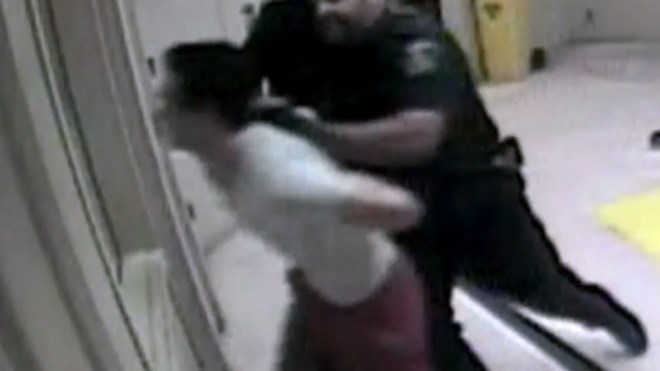 The man who garnered media attention in 2014 when he released a video of a police officer banging his head against the glass during an arrest for intoxication has lost yet another appeal.

Tanner Currie and his lawyer, Trent Falldien, have pursued multiple appeals in the case, arguing the Crown refused to pursue charges in the case because they were biased.

They released a surveillance video to media outlets in December 2014, showing the late Const. Christopher Labreche slamming Currie's head against a window, shattering the glass, during Currie's June 2014 arrest. Labreche died at the age of 37 earlier this summer in a crash on Highway 69.

Greater Sudbury Police Chief Paul Pedersen said at the time Falldien made a “non-negotiable” request for a financial settlement in exchange for not pursuing assault charges. The video was released when that request was rejected.

The footage came from cameras inside the police station, and was given to Currie's defence lawyer as part of the disclosure process.

An internal police review ordered by the Office of the Independent Police Review Director (OIPRD) concluded that Labreche believed Currie was going for his gun when he slammed his head into the window, and that the officer had acted legally.

Falldien pursued a private criminal prosecution in December 2014 with a Justice of the Peace, who issued a summons for Labreche to be charged with assault. The Crown intervened and took over the prosecution, despite Falldien's objections.

He argued the Crown had shown its bias in the case when it offered to withdraw the initial charges against Currie on the condition he pay for the broken window, take an alcohol and drug abuse counselling program and complete 10 hours of community service.

Falldien appealed the Crown's intervention, but that was rejected by a judge in August 2015, who ruled Falldien had failed to prove allegations of bias and abuse of process. The Crown withdrew the charges in October, after which Falldien tried to get an extension to give him time to appeal the August decision.

That appeal was rejected in November, with the judge ruling “the plaintiff had not adequately explained the delay, the appeal was moot as the charge had already been withdrawn, and there were no serious grounds of appeal in any event.”

That same month, Falldien launched a Charter of Rights challenge, arguing Currie's rights were breached because the Crown was biased when it intervened in the prosecution and dropped the assault charges.

That appeal was rejected in April 2016, with the judge ruling that Falldien was arguing the same issues that had already been rejected in previous appeals and that there was “no basis in any event for the relief that was sought.”

The Ontario Court of Appeal agreed with the ruling in March 2017, and the Supreme Court of Canada refused to hear the appeal in October of that year.

In a ruling released this week, Falldien's civil suit against the Greater Sudbury Police Services Board, the Attorney General of Ontario, Her Majesty the Queen in Right of Ontario was dismissed by the Ontario Supreme Court.

The civil suit accused the Crown of “malice, bad faith, defamation, libel and slander,” in making the decision to withdraw the assault charges. And it argued the Office of the Independent Police Review Director had acted in bad faith when it asked Sudbury police to investigate the incident, alleging police were biased and in a position of conflict of interest. The civil suit also argued the OIPRD should be abolished.

The OIPRD was later removed from the suit and replaced by the Attorney General of Ontario, which oversees it.

But the judge hearing the appeal ruled Falldien had not introduced new information that hadn't already been ruled on by higher courts, include the Supreme Court.

“In all the circumstances of this case, the claims relating to the OIPRD cannot proceed,” the judge ruled. “They are frivolous, abusive and disclose no reasonable cause of action.”

The judge dismissed the suit, saying it's obvious that none of the claims in the suit have merit, “can be sustained or permitted to proceed.”