Two employees from a Sudbury-based junior mining company were held hostage for one day by members of a northwestern Ontario First Nation band in 2011 in an attempt to obtain payment from the company as it carried out a gold exploration activity.
Oct 29, 2013 6:12 PM By: Ian Ross - Northern Ontario Business 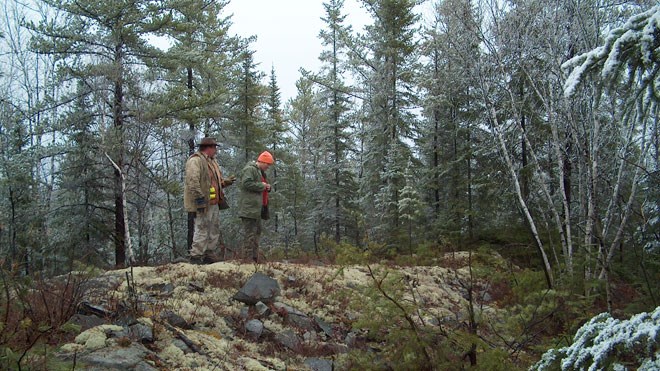 Denied access to its northwestern Ontario gold properties, Northern Superior Resources is taking the Ontario government for failing to properly consult with an area First Nation. Photo supplied by Northern Superior Resources.
Two employees from a Sudbury-based junior mining company were held hostage for one day by members of a northwestern Ontario First Nation band in 2011 in an attempt to obtain payment from the company as it carried out a gold exploration activity.

Now the company is taking Queen's Park to task to recover damages from discontinuing their exploration program.

Northern Superior Resources is suing the Ontario government for $110 million for failing to carry out its legal duty to consult with First Nations after a dispute with the Sachigo Lake First Nation led to the company abandoning work on its mining claims.

Among the details in its statement of claim filed last week with the Ontario Superior Court of Justice, the company contends it was forced to pay $40,000 to the First Nation to free two workers, who were “physically detained,” along with some equipment.

The company said it was one of a number of demands made by the community during the fall of 2011 as they edged closer to a major gold discovery. It has three gold properties – Rapson Bay, Meston Lake and Thorne Lake – 740 kilometres northwest of Thunder Bay and close to the Manitoba border.

That included a demand by the First Nation for almost a quarter of the company's exploration budget for the upcoming 2012 drill season, referring to it an “administrative fee.”

What the band wanted that money for was “completely undefined,” said Tom Morris, president of Northern Superior Resources, in an interview.

“To ask someone for 24 per cent of your exploration budget as an administration fee is a no-go. I can't do that.”

Northern Superior Resources is an award-winning exploration outfit, recognized in September by the Canadian Council for Aboriginal Business for its progressive relations with First Nations.

Morris contends the First Nation was well aware of the company's plans for a $10-million exploration program in 2012 when it imposed this fee.

The company terminated its activities soon after and, according to Morris, they haven't stepped back on their properties since. “I've got the letters and documentation saying clearly you're not welcome back if you don't pay this fee.”

In the statement of claim, the First Nation had further insisted that the company use a locally-owned aircraft, that had recently crashed, to transport drill core out of the property. Northern Superior officials deemed the plane unsuitable and unsafe.

Sachigo Lake Chief Alvin Beardy did not respond to an interview request.

The company's gold properties were within the traditional lands of some area First Nation communities, including Sachigo Lake and Kitchenuhmaykoosib Inninuwug (K.I.), an area that's seen its share of conflict between industry and Aboriginal people in recent years.

Two years ago, Ontario withdrew 23,000 square kilometres of Crown land from exploration and spent a combined $8.5 million to buy out the claims of two companies, Platinex and God's Lake Resources, after a series of confrontations with Kitchenuhmaykoosib Inninuwug, which had declared an exploration moratorium on its traditional land.

Morris said the company was also sent a letter from K.I. saying it wasn't welcome in their traditional territory. But they've chosen not take a confrontational approach; instead pointing the blame at Queen's Park.

“We respect the First Nation but at the same time we're pretty ticked off that the government has absolutely failed in its responsibility to create the right environment to work in Ontario.”

Morris said his discussions with senior staff at the Ministry of Northern Development and Mines – namely deputy minister George Ross and assistant deputy Cindy Blancher-Smith – had been ongoing for a year, and went nowhere.

Cindy Blancher-Smith, who oversees the ministry's mineral development and lands branch, was not made available for an interview.

Instead, Minister Michael Gravelle emailed a response to Northern Ontario Business saying that his ministry has held up its end of the bargain on the consultation front.

“My understanding is that ministry staff have made efforts to engage with both the company and the First Nation, and have offered to facilitate discussions between them. More recently, MNDM also invited the company to make use of the ministry’s new regulatory process to provide a framework for consultation about any proposed exploration activities.

“As the matter is now before the courts, it would be inappropriate for me to comment further."

Gravelle stated the government is committed to early engagement “to bring more certainty to development.”

Morris insists ministry staff hadn't done much consultation at first and only reacted when things took a more serious tone.

“It's a little late like putting the cart before the horse at this point.”

Looking back, Morris said he felt comfortable working with the community since 2005, even signing a series of exploration agreements with the band.

“We felt we had a great relationship with these folks and this really blindsided us.”

He suspects the community is getting bad outside advice.

Morris estimates the company has spent $15 million on exploration with 25 per cent of that going to Sachigo through training, hiring locals and helping to build local capacity.

“We pay some fees (to the band), but they're reasonable,” said Morris, mentioning rent for office space or hiring local folk for company administrative work. “You're (spending) $4,000 to $5,000, not a 24 per cent fee.”

The incident happened before revisions were made official to the Ontario Mining Act, which became mandatory last April, and were designed to reduce misunderstandings between industry and First Nations.

It involves a new protocol for notifying landowners and Aboriginal communities about proposed activities through a system of plans and permits during various phases of early exploration.

“I don't see how the new Mining Act would have shielded us from this problem,” said Morris. “What is in the Mining Act to prevent any First Nation group from coming back to say you need to do the following before we sign off on this plan.”

Morris served on a government advisory committee on the new act but walked away after feeling the government was not listening to industry.

“In their role to consult, they weren't setting up a framework to protect the interests of the First Nations and ourselves.”

Morris said the First Nation now wants them to come back and talk, but the company missed a window of opportunity in 2011 to raise exploration money on the market.

“When this happened we had the opportunity to raise the capital to keep these programs going and I can't reach back and recover that now.”