Blais and around 30 of her classmates designed and built the canoe over the course of a month, dedicating nine hours each week to the project.
Dec 15, 2014 1:15 AM By: Jonathan Migneault 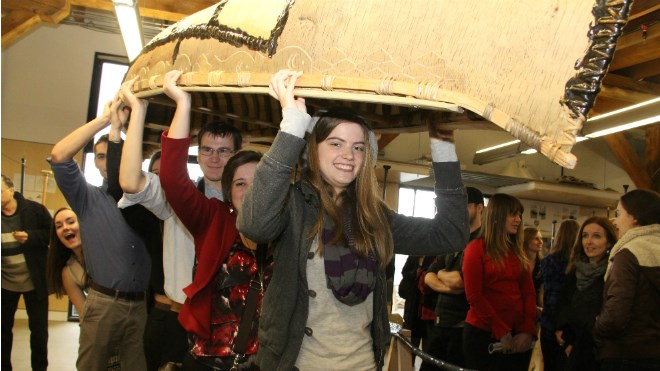 From front, Laurentian University School of Architecture second-year students Sophie Mackey, Maxine Blais, Alex Gunnewiek, Ali Modl and Denis Lemieux worked nine hours per week for a month to complete the birch bark canoe they are holding over their heads. Photo by Jonathan Migneault.
Blais and around 30 of her classmates designed and built the canoe over the course of a month, dedicating nine hours each week to the project.

They worked with cedar for the canoe's skeleton, spruce roots to tie pieces together, and, of course, birch bark to create the outer shell.

Marcel Labelle, a Métis elder from Mattawa, and master canoe builder, was their instructor.

He taught them how to bend the wood to their will, and better understand the material they will go on to use in buildings when they become architects.
“We learned how the material has its own mind.”

While Blais and her peers worked on a birch bark canoe, around 30 other second-year students tackled its more modern cousin, made of space-age carbon fiber.

Pound for pound, carbon fiber has 10 times the tensile strength of steel. It is the primary material used in high-performance canoes for competition.

Gergely Lanci, the commodore at the Sudbury Canoe Club, taught the second group how to build the carbon fiber canoe.

Lanci said his students were also hesitant at first, and questioned how building a canoe would help them become architects.

But he said they too changed their minds once they started the project.

“If these students understand the construction method of a canoe – why we are doing things a certain way – they are very easily able to apply it on a larger scale, or use it as a component on a building,” Lanci said.

Once they had their plan on paper, the students built a skeleton for the canoe using aircraft-quality structural foam strips.

They then covered that skeleton with several layers of uni-directional carbon fiber. Excess resin was removed, the canoe's edges were trimmed, and they later added finishing touches, including seats.

“Tackling small projects like the ice hut or the canoe ... what's nice for the students is they're not doing something abstractly,” Galvin said. “They get to build it, and now they're standing around with their families and there's a sense of completion in a fairly short time.”

Both canoes were on display at the school Saturday.

Students' family members, and local dignitaries, including Sudbury Mayor Brian Bigger, were on hand to see the finished products.

Galvin said the school plans to donate the birch bark canoe to the Wahnapitae First Nation.