The case of an Atikameksheng Anishnawbek woman denied financing for a new furnace reveals a larger issue of on-reserve First Nations people having difficulty receiving credit, say experts on the subject.
0
Dec 10, 2014 7:02 PM By: Heidi Ulrichsen 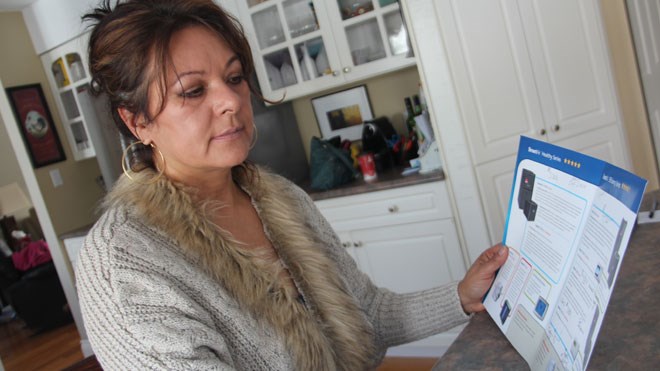 Suzanne Shawbonquit looks over a brochure for furnaces. She was recently told by several local companies that she doesn't qualify for financing for a new furnace because she lives on the Atikameksheng Anishnawbek First Nation. Photo by Heidi Ulrichsen.
The case of an Atikameksheng Anishnawbek woman denied financing for a new furnace reveals a larger issue of on-reserve First Nations people having difficulty receiving credit, say experts on the subject.

She was told she wasn't eligible for financing because she doesn't hold title to the land on which her home sits, and was instead told she'd have to pay thousands of dollars upfront to purchase the furnace.

One of these companies, Reliance Home Comfort, said in an email statement said this is the case not only for people who, like Shawbonquit, live on First Nations, but those who live in mobile homes or on leased properties.

“This is because we need to make a registration (or notice of security interest) with the Land Titles Office on the title of the land to protect our right to the HVAC equipment we rent or finance,” the company said.

“We can't make the registration if the customer doesn't own the land. If individuals don't meet this criteria, our approach is upfront sale of equipment.”

Shawbonquit said her family eventually took out a loan and purchased a furnace outright, but through friends who are wholesalers of such equipment.

This sort of situation is actually fairly common for on-reserve First Nations people, said the legal counsel for the Union of Ontario Indians.

That's likely because of the way the Indian Act is structured, said Fred Bellefeuille. Section 89 of the Act states personal property of Indians cannot be seized by non-Indians.

“Service providers, utilities and lending institutions fear if they bring their property on reserve and it's somehow connected to a band member, they'll never be able to get it back or collect on any defaults,” he said.

But, he added, that can be remedied by setting up conditional sales contracts.

“As long as they have that in their agreement, they can call back on the asset, then they should be OK,” Bellefeuille said.

It's also difficult for those living on reserves to receive a mortgage to build or purchase their own homes because they don't personally own the land, said Jean Beaucage, chair of the First Nations Market Housing Fund.

His organization works with First Nations and lending institutions to cut red tape, paving the way for home ownership for band members.

But he said it recently took his daughter a year to receive a mortgage for the on-reserve house she was building, showing there's still a lot of work that needs to be done.

As for financing for smaller-ticket items, Beaucage said when he was chief of Wasauksing First Nation, near Parry Sound, the band was often asked to co-sign for loans for items such as cars.

He questions whether the provisions set out in the Indian Act are really in the interests of First Nations people.

“It's an act that's been around for more than 100 years that often serves to keep First Nations people poor than help them out,” Beaucage said.

Shawbonquit said she and her husband also had a hard time receiving a mortgage when they built their house 18 years ago. The contract was ultimately signed by the Minister of Indian Affairs and Indian Development.

But other than that, she said this is the first time she's had trouble receiving credit because she lives on-reserve, adding she even rents a water heater from Reliance Home Comfort.

Shawbonquit, a business consultant who's served on many non-profit boards in the Sudbury area, said she's concerned about impoverished band members encountering this policy, and being required to purchase furnaces outright.

She said she's contacted local politicians to see what can be done.

“I find it's just unacceptable in this day and age,” she said. “Are you kidding me?”