'My stronger self': Survivor tells Run for the Cure crowd how breast cancer helped her gain perspective 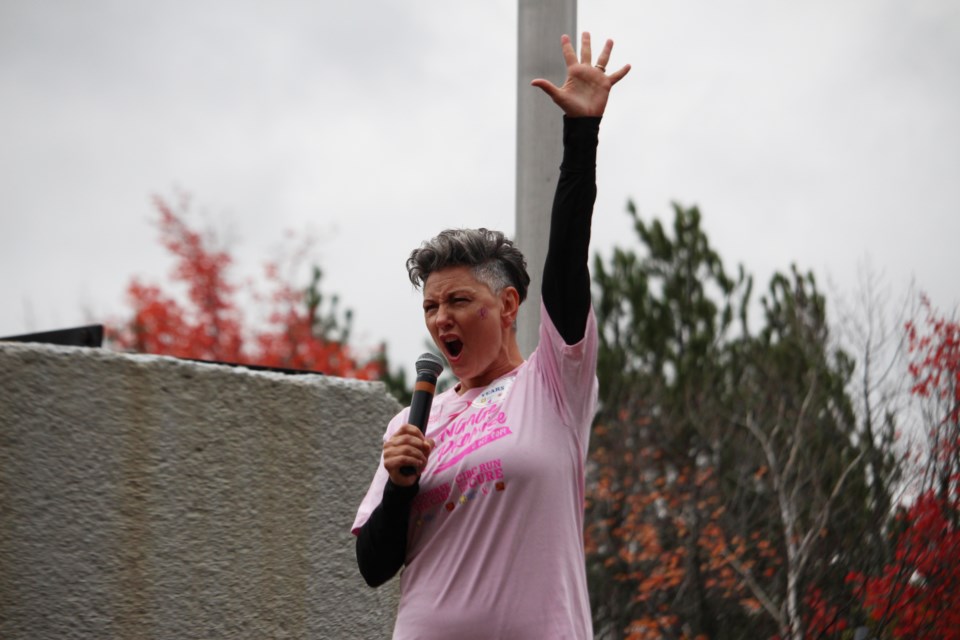 The Canadian Cancer Society hosted the 22nd annual CIBC Run for the Cure at Cambrian College Sunday, raising $67,000 for breast cancer research with the help of 450 participants.

Speaking on behalf of breast cancer survivors at the event was Sudburian Louise Bergeron, who said while her cancer journey was in no way easy, it encouraged her to develop a new perspective on life she may not otherwise have had.

Bergeron was diagnosed with breast cancer in 2011 and underwent a lumpectomy, chemotherapy and radiation.

Given a clean bill of health in 2013, Bergeron said the chance of the disease returning has crossed her mind since then, but her focus has been on living - not just surviving.

"If anything, it invited me to be my potential self cause I needed different strategies to deal with things than I might have in the past."

Through this journey, Bergeron said she began to understand the importance of self-care, self-love and of welcoming support such as that found at CIBC Run for the Cure.

Learning to accept help from others may not have been easy, but if her visits to the cancer centre taught her anything, it was that it takes a lot of people dedicating their heart and time to make recovery possible.

Bergeron said she was humbled and admittedly a little scared to tell her story, but hoped that by doing so she helped at least one person in the process. Because, as she was reminded by the large crowd of people in attendance Sunday, many more than her have been touched by cancer.

"Any change in the world for the better, it doesn't happen unless we're a little bit disrupted, but we choose to be resilient and we do something about it,” and that's what's happening here."

The CIBC Run for the Cure is a five-kilometre or one-kilometre walk or run introduced in 1998 to raise funds for breast cancer research through the Canadian Cancer Society. It is credited as the largest single-day, volunteer-led event in Canada in support of this particular form of cancer.

Since its inception, a total of 19,661 community members have helped Greater Sudbury contribute $3,627,749 toward this national initiative. Despite this significant contribution, Sally Dunton, community fundraising specialist for the Canadian Cancer Society of Sudbury, said there is still work to be done.

"The fact is, there's still 70 people that are going to be diagnosed every day across the country with breast cancer...that's almost 27,000 people a year," said Dunton. "So we are going to continue to fund research and programs and services that will help breast cancer patients," she said, for as long as necessary.

"Our hope is that we make it beatable (so) people can live and move past it, and that's our goal."

Since being introduced by a handful of employees in the 1990s, the CIBC Run for the Cure has become the largest sponsorship offered by CIBC over the course of the year said Robert Giroux, community general manager for CIBC Sudbury.

This has inspired CIBC banking centres across the country to "turn pink" midway through the summer he said, with a fleury of fundraisers in support of the Canadian Cancer Society. It was through these local fundraisers that Giroux said he first became involved with the CIBC Run for the Cure, evolving to a more dedicated role when his mother was diagnosed with breast cancer a year later.

"Everybody raises money for a lot of different causes and there's no better cause than this one," said Giroux. "It's one of those causes that has touched everyone in some way."

You can check out more photos of the event in a photo gallery published on Sudbury.com this past weekend.

Sudbury's NORCAT finds a 'silver lining' in the pandemic
Jul 10, 2020 6:00 PM
Comments
We welcome your feedback and encourage you to share your thoughts. We ask that you be respectful of others and their points of view, refrain from personal attacks and stay on topic. To learn about our commenting policies and how we moderate, please read our Community Guidelines.