NHL vs Docs continues to grow in its third year 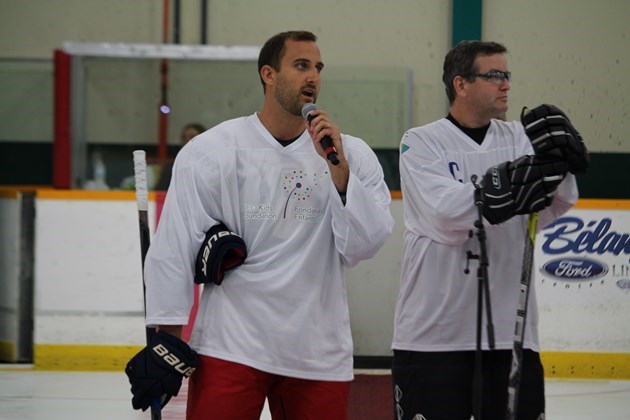 Nick Foligno and Dr. Sean Murray at last year's NHL vs Docs charity game. The two will hit the ice together again this year on Aug. 12 for the third annual game. (File)

The NHL returns to Sudbury on Aug. 12 for the third annual NHL vs Docs hockey game.

The event has grown in leaps and bounds and organizers have expanded the entertainment to a day-long event. This year's game has been moved from the Countryside Arena to the Sudbury Arena in order to accommodate more hockey fans.

Festivities kick off at 11:30 a.m. with a barbecue and activities outside the front entrance of the arena. NHLers will be on hand for the fun and will be meeting and greeting fans and signing autographs. Tickets for the game are $22 each, with proceeds going towards NEO Kids.

Nick Foligno has been instrumental in putting the event on since its inception and is thrilled with how it has been received by the community.

"It's gained traction every year it seems and the public has been really supportive," said Foligno. "This event wouldn't be possible with the community coming out and packing the house. That's why we moved to a bigger arena this year so that we can facilitate more people and I'm just trying to do my part by bringing up players and teammates and legends to add a bit of an alumni feel to it as well."

Foligno speaks highly of his young teammates who jumped at the chance to take part in the game and help with NEO Kids, a cause that is near and dear to Foligno and his family.

"I think about when I first came into the league and how influential the older guys were on me and I'm trying to do that as well," said Foligno. "I realized the importance of giving back, and I think that holds true for our whole team whether it's here in Sudbury or back in Columbus, we pride ourselves on being out in the community. As much as I might twist their arms to come up, they jump at the opportunity and I think that says a lot about them as people."

Dr. Sean Murray was the brains behind the creation of the NHL vs Docs game, with what he calls a "random shower thought" when thinking of ways to support NEO Kids.

"It was just an off-the-cuff idea and I texted Nick, because I had known him for a while and he really stepped up," said Murray. "It came together really quickly that first year, where the idea sprung up in March and Nick was able to get the players and everyone to come up for August."

Murray applauds Foligno's dedication to the city where he played his junior hockey and considers him a Sudburian at heart.

"He's very committed to this city and to NEO Kids, I'd consider him a Sudbury resident even though he lives in Columbus during the hockey season," said Murray.

"The first event raised huge dollars and Nick has strived to make this bigger and better every year."

That bigger and better comes in the form of a new addition to this year's event, with the introduction of an evening with NHL legends following the game at the Caruso Club.

The evening will include a VIP cocktail reception with the opportunity to mix and mingle with NHL legends and players while you indulge on gourmet hors d'oeuvres and food at various stations.

A question and answer period will take place with the NHL legends and players led by Joe Bowen, followed by a live auction. To date, NHL legends include Wendel Clark, Randy Carlyle and Mike Foligno. The NHL players playing in the hockey game will be in attendance as well.

"I think this event is going to be great and it can cater to all ages of hockey fans," said Foligno. "You can have grandparents and parents and their kids who will all have memories of different players that they can meet and mingle with. I think these types of things are so important because we as players don't get a lot of opportunities to be out and mingle with the public and get to know them and they get to know us as people."

For Murray, he says the event is a treat for he and his fellow doctors who will be playing in the game and attending the VIP evening.

"I think if you're born and raised in Canada, hockey is in your DNA," said Murray. "Obviously the support for NEO Kids is first and foremost, but being able to step on the ice with these guys, it makes you feel like a kid, it's a childhood dream to play with NHLers. Being able to just be around them and hang out is so cool because they're all such great guys."

The VIP event begins at 5 p.m. at the Caruso Club. Tickets are $125 per person and can be purchased by calling the NEO Kids Foundation office at 705-523-7100 ext. 1234 or emailing neokidsfoundation@hsnsudbury.ca.

Sponsorship opportunities are available for both events: Vale presents: NHL vs Docs and An Evening with NHL Legends. For more information, email neokidsfoundation@hsnsudbury.ca.

Police investigating sudden death of Sudbury man who was found in creek in North Bay
Jul 9, 2020 6:40 PM
Comments
We welcome your feedback and encourage you to share your thoughts. We ask that you be respectful of others and their points of view, refrain from personal attacks and stay on topic. To learn about our commenting policies and how we moderate, please read our Community Guidelines.