While nickel prices are as low as they've been since the recession, the founding executive director of Laurentian University's Goodman School of Mines said he expects mining to “chug along” in this area.
0
Jul 11, 2013 3:31 PM By: Heidi Ulrichsen 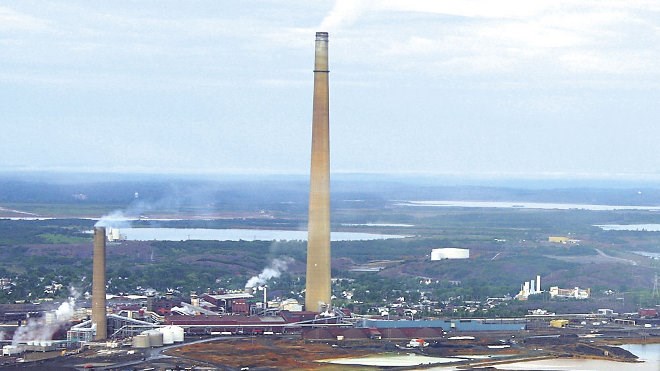 Goodman School of Mines executive director Bruce Jago said he doesn't expect the low nickel prices to hurt large producers such as Vale as much as smaller companies. File photo.
While nickel prices are as low as they've been since the recession, the founding executive director of Laurentian University's Goodman School of Mines said he expects mining to “chug along” in this area.

But Bruce Jago expects smaller operators with high production costs may close mines, while larger companies such as Xstrata Nickel or Vale will begin to curtail production.

Nickel prices have been something of a rollercoaster ride in recent years.

In 2008, during the recession, nickel prices dipped to as low as $4 a pound, plummeting from historic highs of $24 a pound a year before.

With large, integrated operations, it's difficult to close mines, because the smelter depends on the ore coming from the mines, he said. “That's one of the reasons I worry a little less than I would,” Robinson said.

But exploration companies who find mineral deposits and develop them in hopes of selling them to large mining companies are hurting, he said.

Robinson said larger companies already have a number of properties in line for development, and aren't in the market for more.

“Unless you come in with something that's a lot better than what's in the portfolio right now, you're not going to sell, which actually hurts a lot of people in Northern Ontario, because we've got a good collection of juniors.”

The gradual slide in nickel prices is being caused by a number of factors, including the fact the Chinese aren't purchasing as much nickel, Robinson said.

That's because China's economy is slowing for a number of factors, including the fact that their biggest customers, the United States and Europe, are trying to claw their way out of financial problems, he said.

The country is also unable to make as much money because wages for Chinese workers have increased, Robinson said.

There has also been a housing boom in China that's gotten a bit out of control, and now the government is trying to dampen it a bit, meaning they aren't purchasing as many resources, he said.

Jago said the Chinese are increasingly using nickel pig iron, which is made from laterite nickel, as opposed to the nickel produced locally, which comes from nickel sulphide. Laterites produce a “lesser nickel product,” which is less expensive, Jago said.

The economies in the United States and Europe are also stagnating, so they're not purchasing as much nickel, he said. At the same time, large mining companies around the world are bringing new mines on line.

“There's more nickel coming on the market at a time when nickel consumption is not as robust as what it has been,” Jago said. “So it's just supply and demand fundamentals, that's pretty much all it is.”

Both Robinson and Jago say it's anybody's guess how long the latest nickel price slide is going to last.

“I was president of a junior company last year,” Jago said.

“I figured by the end of last year we were going to be out of it, but we weren't. So I really don't know. I guess if I could figure that out, I'd be a lot richer than what I am.

“I think we're into this for at least another six months, if not longer. A lot of it depends on Europe, the U.S., and of course, China.”

Robinson said his personal feeling is there's going to be a turnaround in six months to a year.

He said there's still “huge amounts of infrastructure” that need to be replaced in North America, and China needs to build homes for 250 million people over the next 10 years.

Northern Life asked a number of local mining companies for comment on how they're coping with the low nickel prices.

Representatives from Vale and KGHM International were not immediately available for an interview. A spokesperson from Xstrata Nickel said the company is not able to accommodate Northern Life's interview request.

However, Vale's vice-president of Ontario and UK operations said during an April speech that nickel prices, which were then $7 a pound, are creating huge challenges for the company.

Kelly Strong said $7 a pound nickel prices are comparable to $2.50 a pound a decade ago.

“Today's prices are actually as low as historical recessionary prices,” he said. “And those of us who lived through those price cycles know how challenging they were.”

He said the company is no longer striving to be the biggest producer in the world, but the best, with an eye on long-term success. Key to that goal is reducing operating costs, which they've done by closing unprofitable mines such as Frood.

Mark Isto, vice-president of operations at First Nickel Inc., which owns Lockerby Mine in Sudbury, said the company is in the process of working on “plans and cost savings” in light of the low nickel prices.

He said more information about what the company plans to do should be released at its second quarter board meeting, which will happen at the beginning of August.

A contract signed earlier this week with Mine Mill Local 598/CAW, which represents 115 workers at Lockerby Mine, helps, as it “solidifies one of the variables” and helps the company with its planning, he said.

The company didn't take into account $6 a pound nickel prices when setting up its business plan for the year, he said. “We initiated the year with a budget expectation around $8 (a pound),” Isto said.

In 2008, at the height of the recession, 140 of the company's 160 workers were laid off, and production was suspended at its Lockerby Mine. First Nickel only ramped up to full production at the mine this past spring.

When asked if something like that could happen again, Isto said “we certainly will do everything to avoid anything of that nature.”