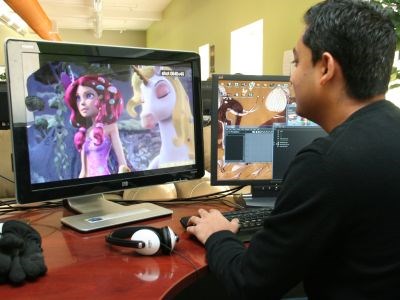 March Entertainment animation supervisor Sushant Dholakia looks over some footage from Mia and Me, one of three productions that will benefit from a $2.5-million investment from the Northern Ontario Heritage Fund Corporation. Photo by Arron Pickard.

A $2.5-million investment in the local television and film industry will help raise the curtain on three new animated productions from Sudbury's own March Entertainment.

March Entertainment is developing three new series targeted to young children. The Northern Ontario Heritage Fund Corporation is providing the money through its Emerging Technology program, which will help create up to 120 jobs for animators.

The local company, which operates a state-of-the-art 13,000-square-foot production facility in downtown Sudbury, is currently working on Dex Hamilton, Alien Entimologist, set in the year 3000 where Dex and his friends battle to subdue alien insects and keep the world safe; Mia and Me, a fantasy adventure series about a young girl who is magically transported into a world of unicorns, elves and dragons; and Tossed in Spaced, a comedy feature centred around a group of misfits on a mission to establish a colony on another planet.

Mia and Me has been sold to most major territories around the world and will begin airing in France, Italy and Germany over the next few months, March Entertainment president, Dan Hawes, said. The NOHFC investment will allow animators to increase the quality of the CGI 3D animation to be able to compete on a global level.

March Entertainment animation supervisor Sushant Dholakia looks over some footage from Mia and Me, one of three productions that will benefit from a $2.5-million investment from the Northern Ontario Heritage Fund Corporation. Photo by Arron Pickard.

Deals are currently being negotiated within Canada and the United States, Hawes said. Each production usually requires the talent of more than 40 employees.

Animation is a very new and growing technology in northern Ontario, which is being put on the worldwide map through companies like March Entertainment, Sudbury MPP Rick Bartolucci said.

Mia and Me has been marketed in most countries around the world, but not only that, a number of March Entertainment employees have moved to Sudbury from other parts of the world.

“(These individuals) are raising their families and growing their future opportunities right here because of this animation studio,” Bartolucci said. “March Entertainment continues to be one of the pillars of northern Ontario's film and television sector.

“When we go to the movies, we always think about Hollywood, the movie capital of the world, but we've heard very recently that Toronto has an international reputation when it comes to film, and we're learning that Sudbury's reputation is being profoundly enhanced across the planet because of our investment in emerging technologies.”

This industry is “only in its infancy,” Bartolucci added. There have been some growing pains, “but the more we nurture it, the more it will grow in a healthy way and create enormous economic opportunities.”

“This $2.5-million comes with a northern return of about $10 million, and that's a a good return for our dollars,” he said. “I think we can expect to see this industry being funded in the future. The NOHFC is always reviewing submissions, and as we move forward, we want the best bang for our buck. This industry is an economic engine, it's a job creator, and as long as the projects that come before a board of northerners who analyze submissions continue to help grow the industry, then I look forward to further announcements.”

March Entertainment takes pride in being able to supply jobs to people from around the world, Hawes said, and added his company looks forward to being able to employ graduates from Cambrian College's animation program. The animation industry is cyclical, and it would be of great benefit to employ people from Sudbury and northern Ontario who, between jobs, wouldn't leave and head back to Toronto.

The film and television industry contributes almost $2 billion annually to the economy and supports more than 23,000 direct and indirect jobs.