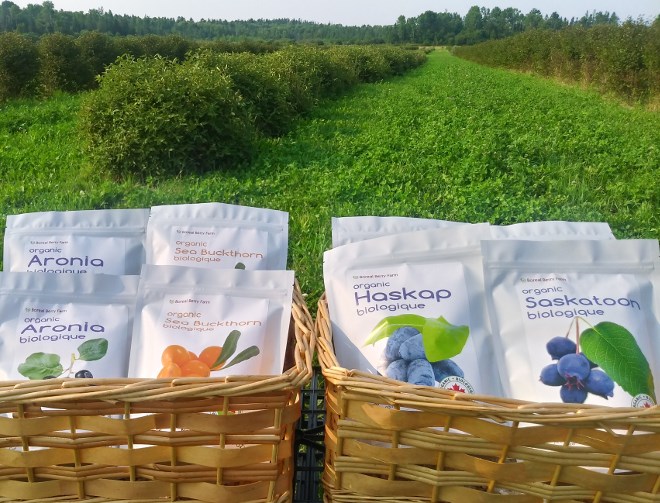 Boreal Berry Farm and Winery produces 12 frozen fruit products, which are being distributed through grocery stores across Ontario. Notably, the business signed a contract with Metro last August. (Supplied photo)

In his early days as a fruit farmer, Greg Melien prefaced every public tour of his Warren-area farm explaining just what, exactly, a haskap berry is.

Resembling an elongated grape, the cold-tolerant fruit was, at that time, a rare sight on most grocery store shelves, and few were familiar with its tart, blueberry-raspberry flavour.

But nearly a decade on, the fruit’s popularity has skyrocketed, and the cobalt-coloured berry is hitting its stride as a tasty, vitamin-rich alternative to more traditional varieties.

“It’s really started to hit the mainstream, which is nice to see,” Greg said.

That’s good news for Greg and his wife, Mira, who together own and operate the Boreal Berry Farm and Winery, about 40 minutes east of Sudbury.

There, the couple grow, harvest, package and freeze several types of berry – haskap, lingonberry, sea buckthorn, aronia, and Saskatoon among them. Twelve products are available in total, including two berry blends, which are shipped frozen to grocers provincewide.

A big break came last August when the couple signed a distribution agreement with the Québec-based grocery chain Metro, which now stocks eight of the Meliens’ products in 18 stores across Ontario.

“If there’s a Metro store between Barrie and Thunder Bay, we’re in it,” Greg said.

The Meliens have been frequent participants in the Northern Ontario Pavilion at the Royal Agricultural Winter Fair in Toronto, where thousands of visitors are introduced to their unique fruit wines, jams and dessert toppers.

When Metro representatives approached the Ministry of Agriculture, Food and Rural Affairs with a request to connect them with Ontario producers, the Meliens were selected for an interview, and the agreement rolled out from there.

The grocery behemoth zeroed in on the Meliens’ ability to produce distinct fruits that aren’t easily acquired elsewhere, Greg said, while customers appreciate the fact that they can enjoy fresh, locally produced fruit even in the off-season.

To meet the growing demand for their products, change is ongoing at the fresh-fruit enterprise, which the Meliens launched in 2011.

Situated on an old Finnish homestead that dates back more than eight decades, the operation is organic, sustainable, and biodynamic.

More than 50 acres of land have been tiled for drainage, and work on another 30 acres is currently underway.

Greg estimates they now have about 40,000 plants on site, and the couple also relies on a small acreage in Lambton County (west of London), overseen by Mira’s parents, to cultivate their peaches.

Once harvested, the fruit is fed into a four-lane packing machine at the on-site production facility before being sealed and moved to the walk-in freezer to await delivery. In March, the freezer space was being expanded by 500 square feet.

Additionally, the couple has now been certified under the Safe Food for Canadians Act, legislation that was introduced in January to regulate the food industry, which allows the Meliens to export and sell to a range of manufacturers, restaurants, food service companies and other wholesale locations.

“We’re gaining anywhere from three to four new customers a week now,” Greg said. “It’s been fun. It’s nice to be selling a product that people want, and it’s just flying out the door.”

Some things at the farm haven’t changed.

The couple still produces their original product, haskap wine, for a selection of loyal customers who put in annual orders.

And most of the farm work is still done by Greg and Mira, although they have brought on a bookkeeper and a part-time worker to help with the overflow. Greg predicts hiring a few extra hands this summer to help in the orchard.

Currently in talks with additional distributors, Greg and Mira believe it will just be a matter of time before their products are available on an even wider scale. But the reception at home has been the most encouraging.

“We've noticed, just with our own sales data, anything within about 100 kilometres of us in Metro stores are doing really well – everyone knows the name,” Greg said.

“Certainly, people in the North here have been very supportive.”

Long-term care facilities need to be overhauled, says carpenters' council
Jul 13, 2020 5:00 PM
Comments
We welcome your feedback and encourage you to share your thoughts. We ask that you be respectful of others and their points of view, refrain from personal attacks and stay on topic. To learn about our commenting policies and how we moderate, please read our Community Guidelines.